Behind the Cover: BCM delivers a Brisbane strike 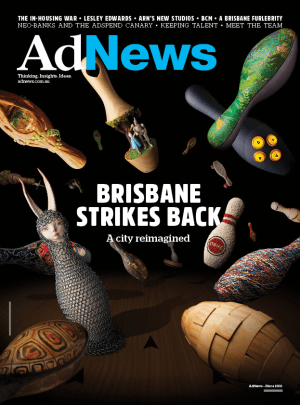 This first appeared in the AdNews October edition. Subscribe here for your copy.

The creative contingent of adland is the beating heart of the industry. To embrace this, and with a mission to create awesome and inspiring covers, each month AdNews hand-picks an agency to work its magic.

To reflect this issue’s Brisbane-centric theme we reached out to one of the city’s oldest agencies BCM. With no spares in sight, the local full-service indie created a striking cover inspired by a charity event for Youngcare which is supported by the local creative community.

AdNews journalist Paige Murphy spoke with the Brisbane natives to find out more about the process of creating the cover.

What were your initial thoughts on the Brisbane brief?
Brisbane obviously doesn’t get as much attention as Melbourne and Sydney. Having AdNews spend some time unpacking the market and what is going on is a positive thing for the industry. There are some very good media and creative agencies and integrated indies, all doing some pretty impressive work for some big, national brands, but we fly under the radar a bit, including the clients and the media as well.

Post first brief chat, what went through your minds and what were the next steps you took as a team?
The reason we fly under the radar is that no one takes themselves too seriously, and everyone just gets on with the job and enjoys the lifestyle up here. So, initial thoughts were around “no big heads” and a “get on with it” mentality. Ultimately though it was the closeness of the industry and the fact that we kind of all like each other, that seemed the best place to start with a cover design.

The one idea to rule them all – how did you know you’d landed on the best concept?
We wanted an idea that combined the fact that the AdNews feature would shed some new light on Brisbane, and that people would see that the industry up here fights above its weight class. We decided to combine the theme of “Brisbane strikes back” with a charity event the whole creative community supports called CEX. It’s run by Cutting Edge and supports Youngcare. Basically, local creative people are asked to transform an everyday tenpin bowling pin into art. They are then auctioned with all proceeds going to Youngcare. Some of the pieces created are amazing and attract thousands of dollars at auction.

What were the biggest hurdles you faced?
Most of the pieces for the upcoming event were still being created as we looked to hit the AdNews deadline. Luckily, we got our hands on a selection of the pins and through the photographic mastery of Alex Buckingham we quickly captured all their beauty.

Tell us about the actual creation techniques.
Photographing the pins was a challenge because not only were they all different, it also involved handling them and manoeuvring them into the right position. The techniques used to create the pins ranged from traditional wood-working skills like lathing and carving to concrete casting and 3D printing. We even have a pin that is adorned with more than 10,000 matchsticks and another has been fashioned into an electric guitar. So shooting them at different angles was a challenge.

Did anything keep you up at night?
In the end, getting our hands on the finished pins and hitting the deadline was the major worry, but we got there in the end.

Best bit about the process?
Just as the Brisbane creative and media industry regularly comes together to help others, so too did some amazing collaborators to create this cover design.