Behind the Cover: Special Group steps into the world of influencer marketing 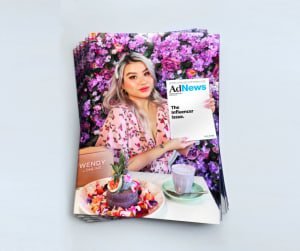 What were your initial thoughts on the Influencer Marketing brief at hand?
It’s a super topical subject made even more interesting in the wake of Instagram’s recent algorithm changes.

Influencer culture and the impact it’s having on society also has a much broader relevance beyond just marketing, particularly when it comes to younger audiences. For example, in China over half of teenagers born post-1995 now aspire to be influencers when they grow up. That’s a lot of influencers! 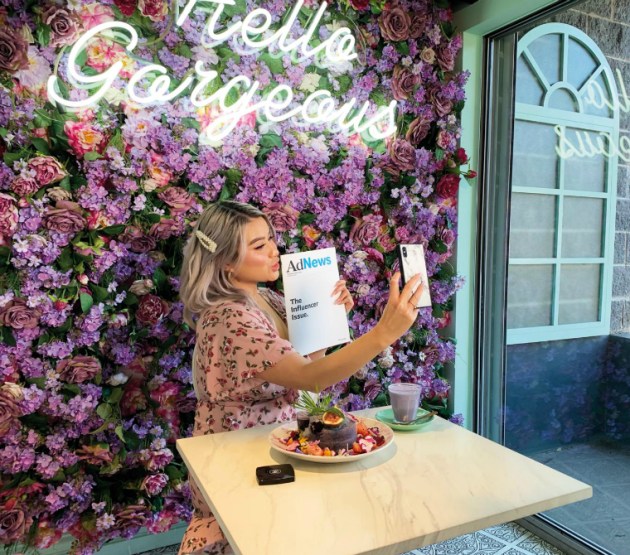 Post first brief chat, what went through your mind and what were the next steps you took as a team?
We wanted to create an idea that in itself would literally participate in the current debate surrounding influencer marketing - whilst also understanding that it shouldn’t really take a side, as the truth is, there isn’t one side. It’s a very complex topic. Our initial exploration covered a range of areas from the notion that we’ve reached the peak amount of influencers, to how creativity has evolved on social media and the questions surrounding authenticity, accountability, and even how they get paid.

How did you know you’d landed on the best concept?
We loved the idea of using this as a moment to demonstrate influencer marketing for real - working with an influencer to shoot a genuine, sponsored social post that we could then use as our cover. It shows how influencer marketing has evolved from what used to be personal recommendations, to a marketplace where you can pay someone to advocate anything. It not only gave the cover image a genuine backstory, but resulted in a real sponsored post on the day the AdNews issue appeared - all created and uploaded by a beauty and fashion influencer with no personal connection to the brand.

Who from the team was largely involved and what were their roles?
We pride ourselves on being pretty stripped of hierarchy in the way we work, particularly as we always want to bring in the best-suited brains to work on something from the get-go. In this case our strategy director and account lead (Celia & Rebecca), creative (Jack & Nils, Jules & Tom) social specialist (Lachlan) and production (Nick) put their heads together from day 1 to find the right direction. They then continued to work as one unit from briefing, to concepting all the way through to production, bringing on vital collaborators throughout the journey - which in this case meant a real social influencer (collaborating on creative, production and even the media!)

What were the biggest hurdles to making this a reality? Any challenges?
Finding the right influencer was probably the trickiest thing. We wanted to get someone whose look could immediately represent the quintessential ‘influencer’. We knew we’d struck gold when we found @wendy_online, a very popular beauty influencer with 150k followers, through ‘MAXCONNECTORS’. Not only did she have the right look, but also the right attitude. Oh, and also a perfect handle to support the idea.

Tell us about the actual creation techniques. How did it come together?
We wanted it to be as authentic to the influencer production process as possible, meaning that we left most decisions up to Wendy. She chose her makeup, her wardrobe, the way she wanted to capture the shot along with the treatment and retouching of the final photo that ended up on the cover. She even picked the perfect location, a café called ‘Social Hideout’ that caters specifically for influencers with a variety of backgrounds and incredibly colourful and perfectly curated food. 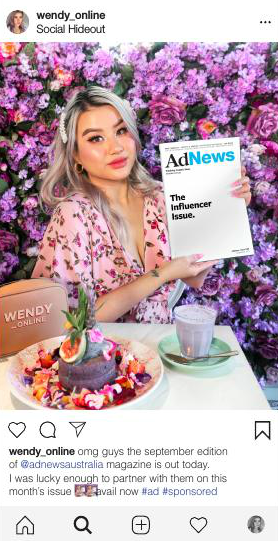 Biggest challenges with the whole process? Did anything keep you up at night?
The biggest challenge we thought we’d face was actually convincing your team (AdNews) to change their masthead; something we feared you would say was untouchable. However, on the contrary, the AdNews crew totally got on board and enthusiastically embraced the idea.

Best bit about the process?
Getting immersed in such a topical and public debate, but also collaborating with a social influencer who had a great attitude towards participating in the process - the fabulous @wendy_online.