Bauer Media has responded to actress Rebel Wilson's accusations that journalists from the publisher contacted her sick grandmother. On Friday, Rebel took to Twitter to call out an ACP (now Bauer Media) journalist, posting a picture of a woman called Elizabeth Wilson to her 2.43 million followers labelling her “total scum”.

The tweet read: “If your name is Elizabeth Wilson and you work for ACP Magazines, just know that you are a disgrace for harassing my sweet, sick grandma.” 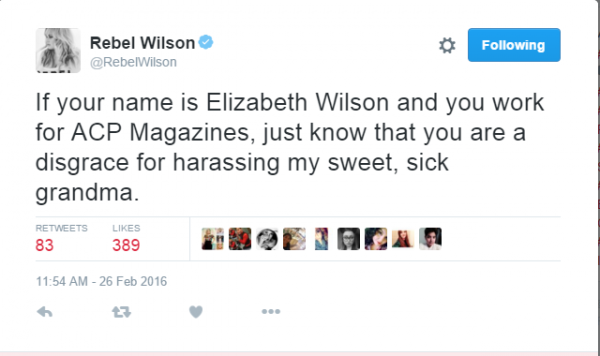 Bauer Media says: "Claims made by actress Rebel Wilson that a journalist working for ACP Magazines (Bauer Media) had contacted her grandmother are false.”

The actress and Stan ambassador posted two images of journalists named Elizabeth Wilson. She quickly realised the first was incorrect after numerous Twitter users and media outlets brought it to her attention.

For a number of hours Rebel refused to take the photo down tweeting: “Well send me a pic of the real Elizabeth Wilson”. 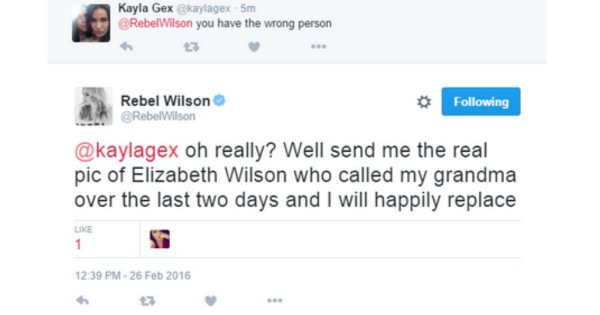 Then, Rebel took to Twitter again with a second image of another Elizabeth Wilson saying: "Unfortunately there are two Elizabeth Wilson's who have worked for ACP Magazines in Oz (now known as Bauer Media Group)." 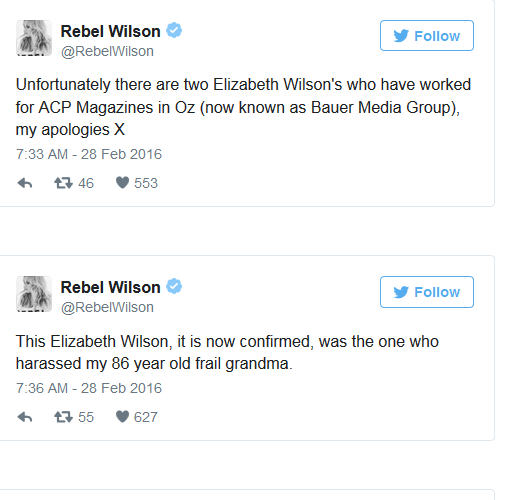 A Bauer spokesperson has said Rebel is still incorrect with her accusations, saying "the person referred to in Twitter posts by Rebel was not working for Bauer Media in any capacity”

“Bauer Media also regrets the decision by Rebel to post an incorrect picture of one of our highly experienced and respected staff members, who is in no way connected to these events and who has been left deeply distressed by the false accusation,” Bauer added.

Rebel has apologised for falsely accusing the first Wilson, but has not apologised for her second accusation, and the image of Elizabeth 'Lizzie' Wilson still remains on her Twitter feed, reading:

"Hey guys, clarification to earlier tweet. Here is the picture of the Elizabeth Wilson who is total scum." 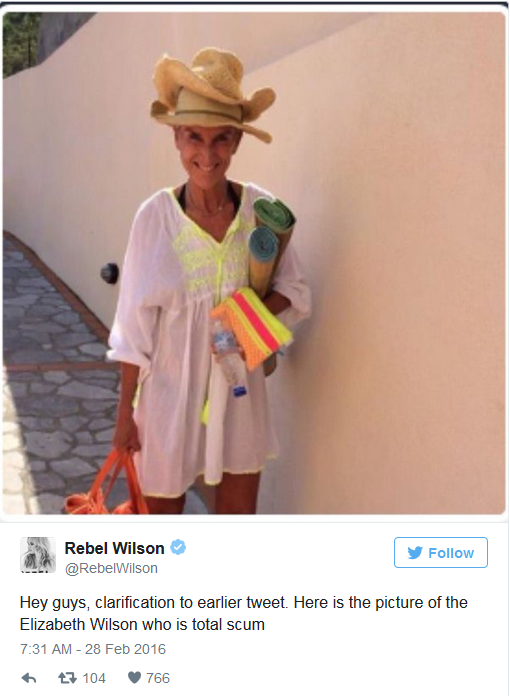