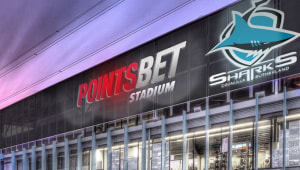 Australian sports betting operator PointsBet has continued to up its presence locally, taking on a major sponsorship deal with NRL side, the Cronulla Sharks.

The gambling platform, which launched in 2017, will now take on a new stadium rights sponsorship with the NRL side, as Shark Park becomes Pointsbet stadium.

The deal will see PointsBet Stadium as the new home of the Sharks for the next four seasons, complimented by the PointsBet logo on the sternum of the team jersey.

The Australian business has experienced significant increases in customer acquisition, turnover and revenue in the past 12 months, while also launching into the recently legalised US sports betting market.

“We are thrilled to be entering a long-term partnership with the Cronulla Sharks. They have ambitious plans both on and off the field and we look forward to being part of their success," Pointsbet co-founder and CMO Andrew Fahey says.

PointsBet Australia continues to develop in tandem with its US enterprise with the synergies across the two jurisdictions driving common growth.

The brand has stated it is focused on building national brand awareness via a growing marketing spend. Most recently the brand revealed it would be backing Seven and Twitter joint project, Armchair Experts.

Pointsbet became the first major commercial sponsor for the AFL analysis show, which is broadcast across both Twitter and Seven's broadcast video on demand platform 7Plus.