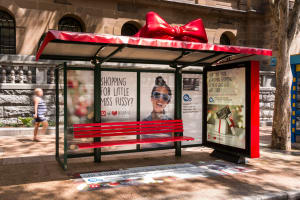 Australia Post has tied up with a raft of media partners, including Dentsu Mitchell, Posterscope, GPY&R and Adshel for a festive activation featuring Shazamable, gift-wrapped bus shelters.

The “m-commerce,” or mobile commerce, activation is for Australia Post's “Load&Go” gift cards and will see Adshel bus shelters in Melbourne and Brisbane tied with giant red bows. It encourages commuters to directly purchase a gift card by 'Shazaming' the ad through an in-app camera which will then take them to Australia Post's webpage, where gift cards can be purchased.

Posterscope CEO Joe Copley said the idea is so successful because it is “relevant for consumer needs at this time of year and enabled by innovation that makes interaction and fulfilment easy”.

“Adshel provided both the setting as well as broad reach to target last minute shoppers looking for the perfect Christmas gift,” Golub said.

In addition Golub said it was “capitalising on the limited down time consumers have in the lead up to Christmas”.

The activation will appear exclusively on Adshel panels and will stay live until 13 December.

It's not the first example of Shazam bringing its app into the outdoor realm, since it announced its visual functionality in May this year.

At the time of launch, it partnered with Universal Pictures to promote the Jurassic World movie release, with Shazmable static ads.

The Australia Post promotion also follows other Adshel campaigns including an exclusive year-long partnership with Hello World. First campaign on deck was the #helloworldRelay, an Instagram relay which curated user-generated content, broadcast on Adshel's digital assets.

“Adshel's network of advertising locations are all at eye level and can be fully immersive, which enables greater user engagement and interaction,” he said.