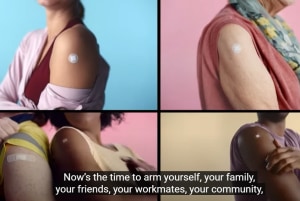 The “arm yourself” vaccine commercial from the federal government misses selling a strong benefit and hence motivation, lacks an emotional trigger and doesn’t lay out a story, according to industry comment.

The ad has been described as a “poor cousin” to the UK and Singaporean ads which use either high theatre or well known celebrities, such as actor Michael Cain and performer Elton John.

Samantha Maiden, political editor at news.com.au, on the Australian attempt: "It's about as exciting as a bowl of weetbix left out on the counter by your kids when you told them to put it in the dishwasher.”

The commercial says: “A COVID-19 vaccine is your best defence, and our only way forward. Now’s the time to arm yourself, your family, your friends, your workmates, your community, someone you love. Find out when you can arm yourself and book your vaccination. Go to Australia.gov.au. Authorised by the Australian Government, Canberra."

The campaign, with a budget of $41 million, will be rolled out across a range of channels, including television, radio, print, digital and social media.

Independent creative Adrian Elton: "All up - while the campaign should be lauded for giving milkshakes and incomprehensibly bizarre metaphors a wide berth - it still falls short of what it could and should have been, as it's neither particularly inspiring, nor generates a sufficient sense of urgency.

“To its credit, the ‘arm yourself’ line is totally solid, and conveys a succinct and important message.

“But the Brady Bunch/Zoom style grid of the vaccinated arms is probably the perfect imagery to trigger anyone who has ever been apprehensive about injections and the mechanics of what precedes the application of bandaids.

“That said, it's incredibly easy to see how this grid of boxes must have ticked all of the strategic boxes for being inclusive and representing all of the different age groups and ethnicities and so forth.

“Paired with the droll and officious female 'telephone banking' voice-over though, it really seems to have the opposite effect of rallying the troops.

“Particularly when compared with the lurid and surreal eye candy of the Singaporean hip-hop campaign that makes you want to giddily roll up your sleeves and jump into a vaccination conga line."

Tom van Laer, associate professor of narratology, the University of Sydney, says the campaign is a step in the right direction, but it misses the secret nd essential ingredient, motivation.

On a scale of one to ten, he scores the campaign a five.

"Social scientists have known for 20 years that trust and motivation are needed for adopting a behaviour (Fishbein et al. 2011)," he told AdNews.

"We also know metaphors like 'Arm yourself' increase trust in available vaccines but fail to motivate people to get vaccinated (Thibodeau & Boroditsky 2013)."

“Compared to the UK, NZ and Singapore ads, our new is a bit vanilla and looks like the poor cousin,” she says.

“It seems like they have tried to use an approach which is intended to trigger a sense of collectivism and encourage people to align with the social norm.

“I can see why they have tried to use this format, but they way it has been executed lets it down.

“It is unlikely to engender a strong response as it is just another rational message public service announcement that misses some sort of emotional envelope to help deliver the message.

“The spot lacks a strong creative hook – we can’t see any people (humans engage with faces), there is little emotion or story, no humour (like we see in the NZ, UK and Singapore ads) and there is no strong score.”

“It also lacks a strong benefit – sell me the dream of no more COVID, no more lock downs and no more masks!

"The device of the arm and use of the play on words is a bit predictable, and could also be mis-heard as ‘harm yourself’ which will play straight into the arms of the anti-vaxxers.

"It is hard to see how this ad will deliver the intended reaction. Making life hard for people - like lock downs and the constant need to wear face masks are more likely to motivate people to get the vaccination than this ad."