Vaccine arm yourself commercial as exciting as a 'bowl of cereal' 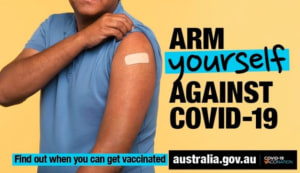 The new federal government ad campaign to encourage Australians to be vaccinated against COVID-19 is out.

The messaging is firmly aimed at the individual, urging them to "arm yourself" with protection from the virus.

But the commercial quickly attracted criticism, with one commentator saying the ad had all the appeal of an aged bowl of Weetbix left to turn into a hard mess.

Another wondered whether the commercial, featuring many bare arms, was to encourage more people to workout.

An academic called out a lack of emotional resonance.

Opposition leader Anthony Albanese: "We were the best in the world in the campaign against Aids, we’ve done drink-driving very well, but after 18 months if this is the best they can do, they need to go back to the drawing board.”

However, John Frewen, an Australian army general and the head of the vaccine rollout, says this campaign is the first step.

"We are going to build the campaign progressively towards the end of the year,” he says.

BMF is listed as the agency, with a contract value of $1.8 million from the federal health department, to provide “creative services for COVID-19 vaccines campaign”.

The commercial says: “A COVID-19 vaccine is your best defence, and our only way forward. Now’s  the time to arm yourself, your family, your friends, your workmates, your community, someone you love. Find out when you can arm yourself and book your vaccination. Go to Australia.gov.au. Authorised by the Australian Government, Canberra."

The campaign, with a budget of $41 million, will be rolled out across a range of channels, including television, radio, print, digital and social media.

Samantha Maiden, political editor at news.com.au, on the ABC program Insiders:  "It's about as exciting as a bowl of weetbix left out on the counter by your kids when you told them to put it in the dishwasher.

"The only thing it makes me want to do is go to the gym and do an upper body workout."

Political journalist Malcolm Farr: "It gives COVID the urgency and alarm of a stubbed toe."

Wendy Harmer on Twitter: “Ergh... is this about getting a life-saving vaccine or a reminder to put the bins out?”

Tom van Laer, associate professor of narratology, the University of Sydney: "Social scientists have known for 20 years that trust and motivation are needed for adopting a behaviour (Fishbein et al. 2011).

"We also know metaphors like 'Arm yourself' increase trust in available vaccines but fail to motivate people to get vaccinated (Thibodeau & Boroditsky 2013)."

Josh Taylor at Guardian Australia tweeted: "It's interesting the tone of the Vax campaign is of the 'protect yourself from others' variety and not 'do your part' kind of thing."