Amazon advertising is strategically cozying up to key agencies 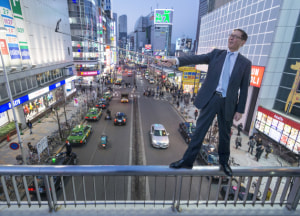 Amazon is getting close to advertising agencies to ensure their media spend is flowing the right way as the giant retail platform continues to weaken the dominance of Google and Facebook, according to analysis by Forrester.

But the industry analysts say don’t get excited too quickly. And watch out because Amazon would love to get that ad spend directly from brands.

"Agencies cannot and should not treat Amazon as just another ad channel because of its status both as an eCommerce platform and a media platform," says Forrester analyst Collin Colburn.

'Brands that sell on Amazon require a deeper level of support for it, such as operations, fulfillment, pricing, and merchandising, as well as buying ads."

Amazon in April this year launched its advertising service, which has become the third largest digital ad seller in the US, in Australia.

And its advertising service is growing fast, as this chart shows: 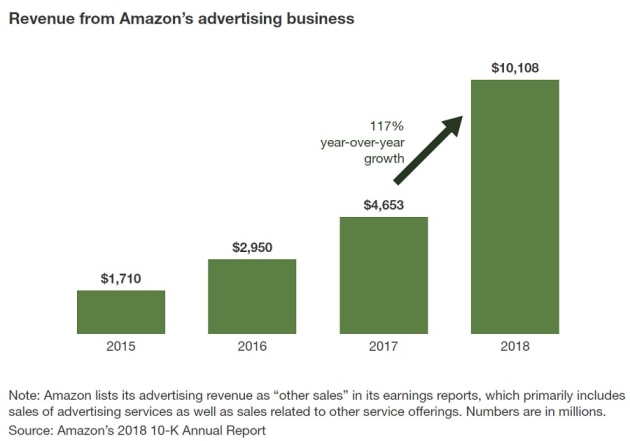 Forrester, in a research report -- Amazon Will Disrupt The Advertising Ecosystem -- launched this month, says media and advertising agencies have a lot to gain with a third major ad platform as marketers flock to them for guidance and execution.

"We’ve already seen some independent, Amazon-focused agency acquisitions because most of the holding companies don’t have experience dealing with Amazon," says Colburn.

"As much as Amazon needs the ad agencies for revenue, agencies also need Amazon for future growth and viability."

Research by Forrester shows Amazon has grown its influence with ad agencies.

The agencies hold the key to the budgets of marketers, especially the search dollars which have historically gone to Google. Those are now at risk with Amazon’s growth.

"Amazon has strategically cozied up to key agencies by offering special beta programs and exclusive data partnerships and has also sought their advice on how to improve its adtech offering," says Colburn.

Forrester estimates that WPP, Publicis and Omnicom combined spent more than $US800 million in advertising with Amazon last year.

And brands are following.

The director of eCommerce for a multinational food and beverage company told Forrester: “We will spend about $US8 million — about 33% more than 2018 — in advertising on Amazon this year, with the lion’s share in search.”

The director of digital commerce at a multinational pharmaceutical company told Forerster: “We have seen [Amazon] algorithmically place their private label products prevalently, which is very concerning for us. So we have had to invest more in Amazon ads to offset that risk.”

And consumer packaged goods brands spoken to by Forrester say Amazon is allowing them to use advertising and marketing dollars in a more accountable way.

"Amazon would love to cut out the intermediary between itself and brands, simply because its corporate strategy has always been to remove the middleman and reduce inefficiency," says Colburn.

Nissan Europe told Forrester: “If the usability of Amazon’s DSP (demand-side platform) gets better and more powerful, we will absolutely look to manage that and other adtech in-house to get full visibility of the customer journey.”

A multinational pharma eCommerce director said this about the agencies he works with: “Amazon is a different way of thinking and advertising. And our traditional media agencies have not had that thinking -- they wanted to apply the old-world, classic media buying approach.”

Forresters recommends agencies build a more cohesive offering around all retail media networks as the space grows, while enabling clients to manage Amazon Advertising in-house, if they want.

"For example, agencies that have been slow to build out an Amazon ad practice could jumpstart their efforts by building
consultative offerings for eCommerce advertising in general," says Colburn.

Amazon-specific agencies such as Flywheel have emerged because marketers can’t count on their legacy agencies to help them navigate Amazon advertising.

Forrester says it spoke to two major consumer packaged goods companies which have a global media agency handling their digital media, except Amazon.

The senior brand manager of eCommerce at one of them said she hired an Amazon-specific agency because her media agency “is not getting the importance of Amazon. They have been slow to treat and embrace Amazon as an ad channel. I just do not get their reluctance."