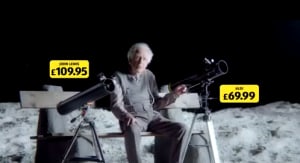 Aldi is unashamedly riding on John Lewis' coattails in a Christmas spot featuring its very own “man on the moon” - one whose love of a bargain, and the ladies, seems more than enough to soothe his loneliness.

In the spot, styled to look just like the John Lewis Christmas ad that has garnered the British retailer so much attention, a much more cheerful granddad is seen trying to decide between two Christmas gifts – one from John Lewis and one from Aldi.

As the man peers into the budget Aldi equipment, he's rather pleased to spot an elderly lady. “But I love this one...” he says, smiling cheekily, as she heads towards the moon carried on her armchair by a bunch of colourful balloons.

Aldi is not the only brand attempting to ride the wave of public attention generated by the original John Lewis campaign. The ad's release comes a week after Age UK, in an official partnership with John Lewis, uploaded a special appeal for donations using unseen footage from the original John Lewis #ManOnTheMoon ad. The appeal went out on the British charity's social media channels and already seems to have generated significant attention, being viewed 123,732 times.

Esther Jackson, marketing and fundraising director at Age UK said of their appeal: “The Man on the Moon advert has really struck a chord with people, helping to raise awareness of loneliness amongst older people and we are thrilled to be able to announce this next exciting phase of our partnership with John Lewis.

"Loneliness can be devastating and we hope this appeal will both cement this huge issue even further into public consciousness and drive vital donations to help us provide companionship, advice and support through a range of services.”

Craig Inglis, customer director at John Lewis said the retailer has been “overwhelmed and delighted” by the response to its ad and the fact it has helped raise awareness of the issue of loneliness among older people.

“We are proud to continue our commitment to Age UK and this important cause by supporting their fundraising appeal and through the involvement of the partners (staff) in our shops,” he said.

What do you make of the Aldi ad? Cheeky fun? Or making light of a serious issue? Leave us your thoughts below ...