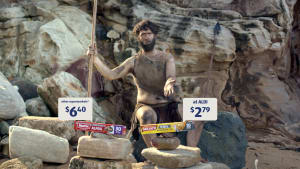 An Aldi ad showing a caveman cooking a live woolly mammoth has escaped the ire of the Advertising Standards Bureau (ASB) despite complainants calling the ad “animal abuse”.

The ad is part of Aldi's “Like Brands. Only Cheaper” positioning and aims to show that two different types of tin foil are the same in terms of quality. It shows a caveman prodding a foil-wrapped mammoth he is cooking over a fire, while the mammoth’s front legs move and it makes a sound.

Complaints against the ad were concerned that the ad portrayed cruelty to animals despite it being an extinct creature.

“It may have happened in the past but it is just in poor taste and completely disgusting to think this is acceptable for TV,” one complaint read.

“This was an absolutely cruel, disgusting and sickening commercial. I didn’t understand the point of it, other that the fact that it made my stomach turn.”

“There is no empathy for the cruelty to the live animal here. And for children, they have seen Ice Age and am horrified, having nightmares about this ad.”

Another read: “We in Australia, love and care for our animals more than most countries according to research. We're trying to teach idiots to look after them and respect them, not treat them like the ad depicts: cooking it while it's still alive, which is horrific.”

Aldi noted that the television commercial is intended to be “absurd” and “is obviously an unrealistic scenario that would never take place in the real world.”

“It is so exaggerated and unrealistic, that most members of the community (or the prevailing community) would consider it humorous, and not a depiction of or condoning violence against animals,” it added.

The ASB agreed, dismissing the complaints on all accounts.

“The board noted that mammoths are extinct and considered that most reasonable members of the community would recognise the imagery of a caveman and mammoth is not a real-life depiction and a living mammoth is not being cooked over a fire,” the ASB said.

“The board acknowledged that the cooking of a live animal would be upsetting to some members of the community but considered in this instance we can only see the shape of an animal.

"As that animal is extinct the board considered that the overall theme of the advertisement is far-fetched and humorous enough to not be depicting, condoning or encouraging violence towards living animals and is not an act that could be copied by members of the community.”