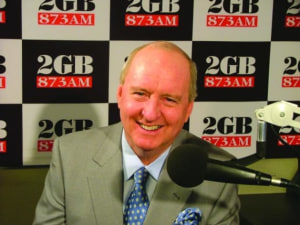 During his morning show yesterday, Jones said he was growing tired of certain corporate activism, referring to an advertising boycott of his show for his “shove a sock down her throat” comment.

Since making the comments in August, Jones has apologised. He was also given a final warning by radio boss Russell Tate who also wrote to the network’s advertisers apologising and promising to work with them to solve the issue.

However, Jones turned on the supermarket chain after a listener sent him an email from Coles customer care worker “Cody”. In the email, Coles said it values diversity and respect, adding it stopped advertising on Jones’ show on August 16, just after the comments were made.

“Is this the same mob that have been ripping off dairy farmers by screwing down the processor who then screws down the diary farmer on the farm gate price,” Jones said on-air.

“I’m not in the business of pumping up my own tyres but I’ll tell you something. I venture to say that if my listeners had the choice between the value systems I practise on many fronts, and especially in relation to the dairy farmers, they’d choose me every day ahead of Cody at Coles customer care.

“So my advice to Coles is get your own value systems in order before you start passing judgement about other people. But don’t worry, we can both play the same game. So I can tell my listeners to give Coles supermarkets and their ‘grocerants’ and their petrol stations a very wide berth.

“This is a two-way street. We can both play the same game. It might be time I entered the ring and started playing that game and good luck to you by the time I’m finished.”

His attack on Coles comes a day after the radio ratings were released, showing Jones maintained his top spot in the Sydney breakfast market, losing just 0.3% of his listeners.

Following his remarks, a listener calling in told Jones “you don’t have to pump up your tyres, you are fabulous”.