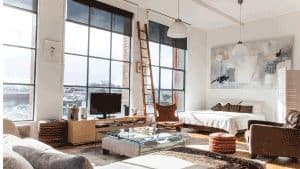 Airbnb, created for people to rent out accommodation, has so far shied away from jumping straight into traditional advertising, instead opting only to show a short 'Welcome to Airbnb' film in cinemas across Australia – it was also pushed through digital and social channels.

Following this it signed a deal as a major partner of Sydney Mardi Gras, for which the brand has temporarily changed the colour of its logo to the rainbow colours. It is also a partner of The Australian Boomers male basketball team and has just signed on as a partner for the Australian Masters Games - a biennial sporting event for people aged 30 and upwards. It's regarded as one of the premier and largest participation sporting events on the Australian sporting landscape

McDonagh also confirmed the company is also involved with the Adelaide Fringe Festival – an annual event with more 900 events staged in pop up venues in parks, warehouses, lane-ways and empty buildings etc.

Omnicom's TBWA is the global agency of record for Airbnb. Locally Airbnb has been working with TBWA's agency, the Digital Arts Network Australia.

For 2015 McDonagh, who said 2015 will be its biggest most significant year yet for marketing, said more outdoor event sponsorships are on the cards and more above the line activations – some of which they have never done before.

While he was loath to expand further on the activations, McDonagh said having a physical presence at events is a key area for them, but it was crucial for such events to reflect the brand's values.

McDonagh stressed that engaging with members of its community through such events puts the brand at the heart of its user-base and lets members know that they are supporting them and giving something back.

He said the company is also due to shortly announce more 'big event' tie ups.

The strategy is in part designed to target those who favour a brand's whose those aligns more with their own. Something an increasing amount of millennials are said to be preferring.

The Mardi Gras hook-up was a great fit for Airbnb as the LGBT community are huge supporters of Airbnb, he said.

Alongside its logo change and running a float at the Mardi Gras, Airbnb will be ramping up digital and social activity around the event.

“With a live event such as this there is a lot of opportunity to do lots on social and to help support the event,” he said.

“We support San Francisco Pride in the US and were an official grand sponsor of this in 2014 so it seemed a natural fit to work with Sydney's Mardi Gras,” he said.

“When we choose to parter it has to resonate without messages and there is arguably no bigger event that celebrates diversity than the Mardi Gras.”