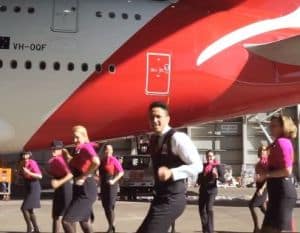 The Running Man Challenge has been sweeping the internet, but for some reason, the New Zealand Police Force decided that a 'running man' dance off was the best way to find new recruits.

After it launched an online video showing cops doing the running man with the hashtag #RunningManChallenge police forces around the world have been getting in on the action.

NZ Police challenged other global police forces to take it on and now the airlines are getting in on the act.

We all know the internet loves a viral video craze, and Air New Zealand has decided to bring Australia into the game. Yesterday the Kiwi airline challenged Qantas to the #RunningManChallenge. Challenge accepted.

Qantas worked with Shootsta to turnaround a response video in less than 24 hours. Not only does a team of Qantas air staff and ground staff co-ordinate their dance moves, but the team upped the ante by bringing in a dancing kangaroo.

It's also passed the challenge on to American Airlines – let's see what the US can bring to the strange online PR stunt.

Yahoo has compiled a list of some of the best efforts.

The Running Man Challenge was started less than a month ago by two US university basketball players doing the running man to 'My Boo' by Ghost Town DJ's.

Viral video trends come and go, but the Ice Bucket Challenge was the last major video challenge that took the global internet by storm. Could the running man be the next?