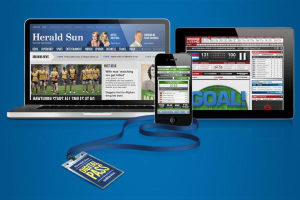 The paywall on the Herald Sun website will be torn down over the next two Saturdays, thanks to a deal struck between News Corporation and AGL Energy.

AGL's media agency, Maxus Melbourne, has struck a deal with the news site which will see the paywall go down on this Saturday, and then again on 24 Januray.

It's to coincide with the promotion of the electricity retailer's 'Free Power Saturday', where AGL customers can use all the energy they want for free on Saturdays.

However, the paywall will be down for all visitors to the news site. Normally users are prompted to sign up for a subscription after reading five articles, but they won't be over the next two Saturdays.

The arrangement will include a homepage takeover for AGL Energy and over the top page advertising the power free Saturday promotion.

“It was developed through our Maxus planning process and combined with AGL’s own research. This is a great example of collaboration between client, media agency and vendor.”

Maxus conceded that the paywall being down would lead to a spike in traffic over the two Saturdays, leading to a spike in numbers for ads which happen to be served on the Herald Sun during those days. Even if their account isn't with Maxus.

It initally came up with the idea after taking data from Roy Morgan on how Victorians were spending their downtime on Saturdays, cross-referenced with AGL's own market research on its target demographic.

It found that consuming news content was a key part of their weekend downtime.

The deal was first discussed with News Corp last year, with the deal believed to be in the works for about four months.

However, AGL at this stage is not planning on sending out an email blast to its customers about the deal, instead letting people discover that the paywall is down for themselves.

“Consumers will [hopefully] be surprised. When they land on the homepage a message from AGL will appear letting them know the Saturday Herald Sun is free, thanks to AGL,” Oates said.

At this stage the paywall takedown is scheduled to run over the next two Saturdays, but Maxus has not ruled out revisiting the idea if it's successful in the past.

The deal was struck by Maxus, with creative done by GPY&R Melbourne. However, the creative account for AGL is now resting with McCann Melbourne after it won a pitch last year.