AFL vs NRL: Who scores when it comes to advertising? 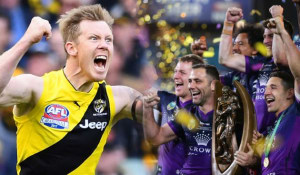 This article first appeared in our May magazine. Support AdNews by subscribing here.

Both the AFL and the NRL have taken bold new creative approaches this year, appointing new agencies and shaking up their messages. Here, we asked some of the industry’s best creatives to review their ads and rule who scored the winning try when it comes to sports advertising.

Here, creatives from VML, the Meerkats and BWM Dentsu weigh in.

Sport advertising is typically very formulaic, with lots of tackles, cheering and hype. This year both the NRL and AFL have departed from these clichés and made work for the channels where people are viewing. These new campaigns address social responsibility with human stories while contrasting the competitive nature of the games with a sense of inclusivity and community. It’s good to see.

2018 marks a small shift in a category traditionally built on energy, hype, and star power wallpaper. Human stories are coming to the forefront, effort in the face of adversity is celebrated, and diversity is not just part of the story — it is the story.

What a difference a year can make. This light speed change in self–awareness from both the AFL and the NRL proves old dogs can learn new tricks, and gain new audiences. Now they’re tackling some of sport’s biggest issues head–on and proving they know what makes us tick; they’ve figured out how to motivate not just my son, but my daughter too.

LM: This isn’t the most creative ad in the world, but it’s a great pump–up for the sport, showing how each team and its fans have their own rituals and cultures that make the team who they are. The graphic social commentary overlaid throughout worked to show the passion from the fans across all the teams. Purely based on building excitement for the upcoming season, I liked it.

RB: The 2017 NRL spot starts with the promising introduction of a fan versus player concept, but quickly becomes a hype montage. The intended message to fans is “you’re a big part of all this”, but that potential somehow turns into “people use social media these days”. This category generally expects mandatory spectacular action shots, equal representation of all teams, a reminder of sport’s emotional highs and lows, a nod to the importance of fans, a tie–in to the overall campaign line, an interesting human insight, a strategy that builds on the previous campaign, and a new and exciting way of expressing all of the above — so this particular type of creative glue is the logical progression. Wouldn’t it be more interesting if we could just blow all of that out of the water? On the bright side, “History doesn’t just happen, history is made” is a killer line.

AH: Hmm … a kind of forgettable clips package. I’m afraid I had to watch this twice because I kept drifting off and thinking about the ads I’d watched before. Not much to comment on here in terms of narrative or core idea. I’m sure it helps if you know or can remember every one of these moments and the importance they had in the season, but then you’d be a true fan, rather than using broadcast as a medium to gain a broader audience, and elevate the sport above the basics, which its 2018 compatriots do so beautifully.

LM: The film seems to speak more to true fans with a lot of assumed knowledge of the players and their teams. So some of the nuances went over my head; hopefully they were only looking to talk to existing fans. I think it’s shot well and demonstrates the tribal nature of the teams and cultures through the fans and home grounds well. Overall it had a great energy, but most of the story they were trying to tell was missed by me.

RB: We’re still firmly in the hype arena with the new “This is How We League” spot, though this time, a creative concept peeks through. Again we’re talking about pride, diversity, loyalty, and overcoming adversity. With an interview approach, James Tedesco’s story could have easily slipped into the AFL campaign. But, as a standalone driving spot, it’s beautifully shot, energetically edited, and cleverly hits a lot of proof points along the way. The team murals commissioned across Sydney extend the concept off–screen, blurring the lines of the film and real world in a memorable way. Racial diversity continues to be inherent, but does the casting of the driver reinforce racial stereotypes? Or is it a win for diversity? A post– diversity–casting reverse–racial anti–statement? I can’t tell anymore. It’s not as purposeful a shift as the AFL example, but a creative step forward with a tough brief. No doubt it’ll get fans hyped, and hopefully we can expect big things next year.

AH: What an intoxicating tribal chant. Energetic, engaging, with nice changes of pace and playful elements to keep you entertained. The best thing about this film is the way the NRL have made it real for fans, with powerful murals in their neighbourhoods and a sense of inclusiveness through ‘real time’ social media commentary woven throughout. The combination of the players and the younger fans makes for fascinating viewing too, as it feels like you have two different perspectives simultaneously. I’d love to see the NRL keep exploring the notion of tribes. But don’t forget there are girls in your tribe too.

LM: As an AFL fan, this piece didn’t do much for me, it felt like they were trying to target non–fans or people who know nothing about the sport. I think using Hemsworth distracted from the excitement of the game and upcoming season, and made it feel a bit glossy and unfulfilling.

RB: Aussies love a Hemsworth, especially when he’s making jokes that only he and his 24 million Aussie best mates understand. Sure, in 2018 we’re a bit Hemsworthed–out, but in early 2017 this was a smart alignment with a beloved super–fan at the height of his fame. Half the work was already done. 2017 also saw the return of the classic 1994 “I’d Like to See That” line for both the AFL and the AFLW. But, what was such a clever and inspiring way to launch the AFLW (presumably without the Hemsworthy budget), ultimately became just a likeable and funny spot for the AFL. Goes to show you that a true emotional insight beats star power any day.

AH: This is a great idea; what a shame about the lacklustre execution. It feels like an epic without the sense of epic. And, as is often the case, it feels far too long for what it is. You get the idea in 15 seconds, but then you have another 45 just to make sure you got the message. With this budget, I feel like they could have made an actual Hollywood–style trailer for ‘AFL The Movie’. Oh hold on, that’s what Tourism Australia just did for The Super Bowl, with Hemsworth. It was awesome.

LM: Racism has plagued Australian sport in recent years and the AFL often finds itself in the spotlight. I think these films are a great way to demonstrate inclusivity and tackle racism and ignorance head–on. It’s nice to see the films focus on telling the story and not making something that just works for TV. ‘Don’t believe in never’ is a great way to frame the journey these people have been on, and I hope these pieces can do a lot to change minds and perceptions of Australian multiculturalism.

RB: ‘Don’t Believe in Never’ moves the AFL from comic patriotism to human stories of dedication, passion and perseverance. While not breaking any new ground creatively, these stories do something else. They manage to cross barriers of race, religion, self–worth, culture, and (gasp) team affiliation. Diversity is obviously on trend, but let’s be honest, the Venn diagram of footy fans and intolerant dickheads does have a cross–over. In this campaign we’re seeing a much–needed shift from hero worship to changing the expectations for who and what constitutes a hero. With budget comes responsibility. Or at least opportunity. My only criticism is for the obscure posters featuring portraits of minorities with the word “NEVER” and the logo. In our current media landscape, we can no longer rely on our audience seeing one piece of communication in order to understand another. When playing on this particular field, the connotations are potentially inflammatory.

AH: Wow. Finally the AFL shows it understands why we love the game so much. And it’s not about men. Or beer. Or aggression. It’s about hope and belonging. And using sport as a common language to cross all manner of boundaries and differences. It’s good timing as well. In the wake of concerns and tensions around Nauru and Manus Island, it feels like Oz needs reminding of the powerful and numerous benefits that migrants can bring to our country, and the importance of making everyone feel welcome. Exquisitely crafted and achingly authentic, this catapults the AFL into super–brand status for me. A brand to believe in. More please.