AFL marketer: 'We want our new ads to appeal to a non-traditional fan base' 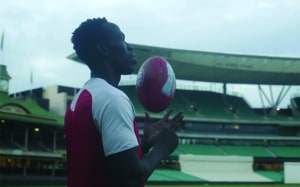 AFL has shaken up its marketing approach to focus on stories that celebrate the diversity and inclusion of the game.

Speaking to AdNews, AFL marketer Julian Dunne says the new campaign aims to appeal to people outside its traditional fan base, such as women and people with diverse backgrounds.

“In the past our advertising has focused very much on the elite game, but we wanted to create a more holistic brand piece that is relevant across all market and all segments,” Dunne says.

“We know our traditional fans really well but we had to do a fair amount of work to understand those who are open to the game but aren’t necessarily engaging with the AFL yet.”

The new campaign introduces a new brand platform for the AFL, Don’t Believe in Never, and takes a more emotional approach, telling the stories of a young Muslim club player, the incredibly moving story of Sudanese refugee and Swans star Aliir Aliir and the coach of Richmond Football Club, Damian Hardwick.

It’s the first work produced for the AFL from Clemenger Melbourne since appointing the agency this year. Collectively, the videos have now been viewed more than 400,000 across Facebook and Instagram and have been celebrated by top ad executives.

They’ve been so successful that the AFL is in talks with host broadcaster Seven to turn the story of Damian Hardwick into a 30-minute TV show.

The AFL’s 2017 marketing push, by Cummins&Partners, features Chris Hemsworth commenting on the AFL teams, is a stark contrast to this year’s ads.

While the AFL has moved away from using celebrities and slapstick humour, Dunne credits last year's campaign as one of the drivers behind the AFL achieving record attendance rates last year of 7.3 million people.

He describes the new work as an “add on” rather than a “replacement strategy”.

“This year there is an opportunity to be more brand focused and promote beyond the elite game. That’s where the stories we tell are really important. We didn’t feel like we needed a celebrity involved, as good as Chris Hemsworth was,” he says.

The long-form social ads will run as 30 and 60-second spots on Channel 7, Foxtel and in cinemas, with Dunne adding that the AFL stills gets the most significant reach from traditional media like TV. 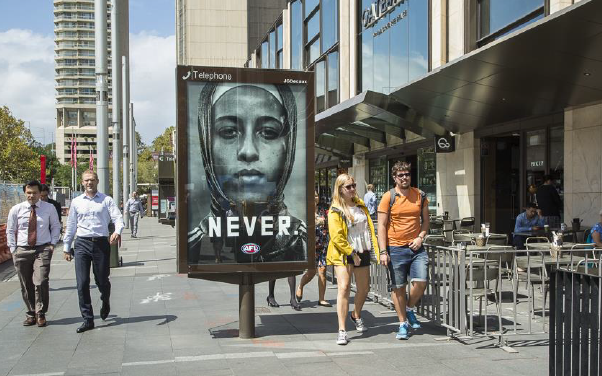 One of the AFL's 'Never' outdoor ads

When it comes to TV, one of the challenges the AFL has had is a heavily reliance on contra deals, Dunne explains.

“We haven’t had a lot to spend in a media perspective because we have contra details with broadcast partners and other partners, so we have channelled more money into media and prominently into digital,” Dunne says.

The AFL has taken a digital focus to target women with its AFLW league, inking a partnership with Mamamia and Broadsheet.

"We are operating in different channels to where we have been traditionally and we therefore need to produce the appropriate content and creative for those channels and that's marked the move more to human interest stories," Dunne says.

AFL has a direct relationship with Facebook and Google, which Dunne says has driven great results for the business.

Last year the AFL’s Facebook efforts earned it an extra $4 million in revenue through 120,000 ticket sales.

“Facebook has been incredibly powerful,” Dunne says. “The ROI was over 20 to 1 and we’ve had really strong success through digital platforms.”

“What we’ve lacked in the past is the right content to target different audiences. There is no point targeting people who aren’t fans with heavy retail messages, because they aren’t going to come to games because they don’t know about the game.

“Awareness is the purpose of the brand campaign then we use Facebook and Google to retarget the people who have watched and engaged with the brand content and transition more into retail messaging."

The AFL plans to spend more with Google this year to bolster its retargeting capabilities.

"The brief to Clemenger was to create work that gave the AFL a broader appeal using the strength of the brand and emotive storytelling," he says.

"They've done that and beyond."