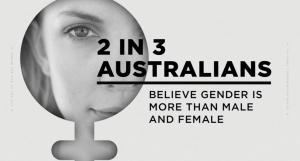 Marketers need to consider the way they approach customers as Australian consumers' views on gender continue to evolve.

Research by the human and cultural strategy team of FiftyFive5 and Nine’s client solutions division, Powered by Nine, examined the views of some 600 Australians around gender.

The research, released in Sydney at The Big Ideas Store, found that the traditional male and female binary is “outdated”, with two in three Australians reporting that they view gender as more complex than this.

While most marketers rely on male and female categories to segment consumers, for most Australians gender is evolving and brands need to recognise this to figure out new ways to segment.

“There is a real acceptance around Australia that we have grown out of the old male and female stereotypes – we have accepted that people can express their gender in a multitude of different ways,” says Hannah Krijnen, director at Fiftyfive5.

“Ultimately, even amongst those who find the changes difficult to accept, there is a strong belief that we need to respect each other. That said, there is still a lot of confusion and people are looking for guidance.”

The research also found that an increasing number of consumers find gender confusing, and the media and marketing world plays a key role in both framing this discussion and highlighting diversity through broader community awareness, driven by the exposure of individual stories in mass media.

Within the research, four in five Australians say brands should not be stereotypical when it comes to gender in advertising.

“There is a great power in media and advertising to expose people to more nuanced gender ideas and other gender identities than simply male and female,” says Liana Dubois, Nine’s director of Powered.

“For too long we’ve taken stereotypes – such as pink for girls and blue for boys – and reinforced them, rather than challenging them when really there is an opportunity to lead.”

Dubois says the industry at large had “legacy-led” perceptions around the audiences of TV shows or print and digital assets – for instance, a perception that sport as a genre is dominated by men when the majority of Australian Open viewers are women.

According to the research, part of the shift in gender perceptions is also generational, with very different viewpoints depending on age.

Around 55% of Australians under 30 reported that they live in between the binary, not agreeing they are totally masculine or totally feminine.

In contrast, 78% of Australians over 50 say they live at the extremes of the binary, agreeing they are totally masculine or feminine.

The research also suggests the opportunity for marketers is around creating a vision of the world which is “gender-full not gender-less” and which celebrates diversity.

“For marketers – and more importantly for us all – the societal shifts in this space are an opportunity, not a threat," Dubois says.

“As marketers we have the chance to lead and bring awareness to a discussion that creates a world that accepts and isn’t threatened by difference. Isn’t that the definition of diversity?”