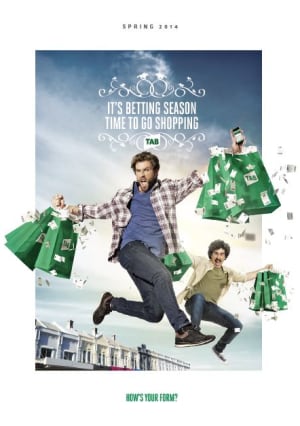 The Advertising Standards Bureau (ASB) has dismissed a complaint against TAB, lodged by a gambling reform advocate, who claimed the advert was deceptive and misleading.

Despite being cleared by the watchdog, the complaint is being taken to the Australian Competition and Consumer Commission (ACCC).

Earlier this month ex-gambler, Tom Cummings, took to Twitter and his 'cyenne' blog, which promotes Cummings' firm beliefs in gambling reform, to share details of his complaint against TAB's latest ad campaign. The story garnered many reader comments for and agasint the campaign.

Created by Whybin\TBWA Group Sydney, the campaign taps into the insight that, for men, betting season holds the same “excitement and passion” as shopping does for women.

Cummings lodged a complaint with the ASB saying the ad normalises gambling, that re-branding betting as shopping is deceptive and misleading, and that the depiction of shopping bags stuffed full of betting slips promotes irresponsible gambling practices, which is illegal.

Cummings said the ASB dismissed the complaint because it was "outside their charter", but was not good enough and he feels it did not read the complaint closely enough. He said the ASB's response letter made reference to a TV complaint and referenced Northern Territory licences, whereas his complaint was regarding an internet advert in the state of New South Wales and Victoria.

“Unfortunately, the ASB dismissed my complaint. Not because there were no grounds, but because it was “outside their charter”. Apparently you’re allowed to lie and misrepresent yourself in advertising, so long as you don’t use violence or nudity to do it,” Cummings said.

“It's pretty much what I expected, although I'm disappointed that they don't seem to have paid much attention to the complaint once they realised it was a gambling ad.”

In the ASB letter seen by AdNews, it said: “Your complaint also concerns the issue of misleading advertising and this falls under Section 1 of the AANA Code of Ethics and is therefore outside the charter of the Advertising Standards Board.”

The ASB said it regretted it could not help Cummings, and suggested that he contact the ACCC or the Office of Fair Trading/Consumer Affairs. Speaking to AdNews, CEO of the ASB, Fiona Jolly, echoed the letter's response and said in the ASB's opinion, the advert did not breach its Advertiser Code of Ethics and that it is quite common for them to refer the complaint elsewhere.