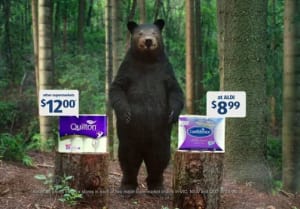 A faun, fake doctor and a hard-hitting ad featuring a young boy drowning, all formed part of the line-up of TV and cinema ads competing in the Australian Creative Excellence Showcase (ACES) last night (Tues).

But it was Aldi's “Like Brands. Only Cheaper” ad campaign created by BMF that took home the prestigious ACE of Excellence accolade.

The retailer, and creative agency, were up against some stiff competition in the 30-second (or less) TV spots, which were also shown online and in cinemas across Australia.
Of the top 10 (listed below), it was Micro Effort, SunRice and Disciple, and The Teacher, Murray Goulburn and DDB Melbourne, which lost out in the final top three round, to Aldi and BMF's Like Brands Only Cheaper ads.

In relation to the 10 finalists, ACES chairman Rob Belgiovane, who is also executive creative director and founder at BWM, said: “As always, the best work floats to the top”.

Speaking before the winner announcement he said: “The thing about this year's winner is that it's a little bit influenced by the fact that everyday the particular category that has won, bombards us in a way that is almost incomprehensible - with just shit.

“There is so much rubbish in this category and when you factor in the category, and I announce the winner, you will know what I mean.”

Aldi's short ads consisted of a series of retail spots with a unique and comical spin on price comparisons. The campaign promoted the brand as being not only equal in quality to their brand name counterparts, but also cheaper.

From a bear in the woods commenting on cheaper toilet role to a fake doctor in a hospital sizing up cheaper washing powder for his whites, the ads had last night's audience laughing out loud at the showing at Dendy Opera Quays, Sydney.

Speaking to AdNews after the event, advertising and PR director at Aldi stores Australia, Sam Viney, said: “When watching the ads, particularly in the cinema, it's the one time people aren't distracted by iPads/phones and all the nuances of the ad become abundantly clear - the audience reaction is testament to that.”

Viney said the campaign really resonates with the audience as the ads are just conveying a simple message, but in an entertaining way.

“We are thrilled to be recognised for this award as there were a lot of other great adverts to contend with,” he added.

Viney stressed that the ads have also been very well received online and that Aldi and BMF have lots more ideas brewing, so viewers can expect a continuation of the campaign.

Awards judge and AdNews editor in chief Paul McIntyre, said: “This is the sort of stuff Coles and Woolworths should be doing. I know they say the 'cheap cheap down down' work works, but Aldi says the smart, witty and entertaining campaigns are moving product big time. If I'm going to be interrupted with ads, I know which ones I prefer to be doing it."

BMF's creative director, Alex Booker, who previously worked at M&C Saatchi and was art director at Loud, said they wanted to make the ads 'unexpected', in a similar fashion to how shoppers feel when shopping at Aldi – upon spotting better deals and products than they expected.

He said being entertaining, but “product centric” was key to the ads' great success.

The ACES jury judged entries that had appeared on either cinema or TV in the last six months and were produced in Australia.

This was the sixth ACES awards and a total of 59 campaigns were entered – the most in the history of the awards, said Hoyts Group CEO Damian Keogh.

In addition to the Ace of Excellence title and trophy, BMF was awarded a cinema media schedule to the value of $25,000 and a private screening.

The ACES are held bi-annually by Val Morgan with media partners AdNews and Adstream.

The Motivational Power Of Cheese, Aldi and BMF

Break The Barrier, St John's Ambulance and The Brand Agency