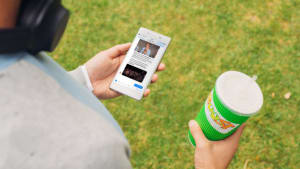 The Advertising Standards Board (ASB) has dismissed complaints against advertising for Boost Juice’s ‘find your perfect matcha’ chatbot.

The chatbot launched earlier this year aimed at 18-24 years old and tries to persuade them to play a dating game built to replicate Tinder interactions.

When you opt to talk with the brand’s chatbot on Facebook Messenger, it introduces you to "four eligible pieces of fruit" and plays matchmaker. The chat varies for different fruit, with the banana being the flirtiest fruit in the game. The bot offers discounts of Boost products in return for banter.

The 30-second radio spot that was called into question by the ASB featured the "flirty" banana and invited listeners to enter a competition to win a trip to Japan.

The banana says: “Put me in your mouth and don’t forget to make eye contact."

One observant complainant said the ad is making an obvious reference to oral sex.

“That is crass and obviously just there for shock value, and is completely unnecessary for advertising a juice bar,” the complainant said.

The Boost Juice chatbot received similar complaints earlier this year for the way the game's characters interacted with users.

Despite the complaints, the ASB determined the campaign did not breach any advertising codes and the case was dismissed.

“The board considered that though the advertisement did make references to sexual activity the double entendres were not overt or clear enough that they would be understood by children,” the ASB said.

While the ASB assessed the appropriateness of ads promoting its chatbot, chatbot interactions with users tend to happen in a private space, which is not policed by a watchdog.

For an upcoming feature on The Age of Chatbots, PwC executive director Megan Brownlow said bots are subject to The Privacy Act, but admits it is hard to monitor as it isn't a public medium, like outdoor or print ads, and relies on incidents to be reported.

To read The Age of Chatbots subscribe to AdNews in-print here.