When it comes to newspaper's Audit Bureau of Circulations (ABC) numbers it's the same story that gets told time and time again. Print is down. Digital, however, is proving to slowly change the ending for publishers.

Looking at total masthead sales, while both major publishers are still experiencing losses in print and overall, their individual digital assets are helping to stave off declines.

Fairfax is ahead when it comes to digital sales, with its digital only sales rising 5.7% year-on-year.

News Corp fared worse in the digital stakes with the publisher losing 9.17% in its digital only sales compared to a year ago. It, however fared better in print than its rival, News lost 12% in print sales year-on-year, Fairfax however, lost 18.94% during the period.

When it comes to net paid digital sales, including print plus digital bundles, Julian Clarke, CEO of News Corp Australia said in a statement the publishers digital numbers are up.

“The latest ABC circulation data shows our strong growth in digital subscriptions, with Mon-Fri net paid digital sales up 8% year on year. This includes 9% growth at The Australian and 11% at the Herald Sun.”

The numbers reflect both of the individual publisher's strategies, with Fairfax strongly backing its digital assets, and News making a push still in print but as well as for bundled subscription sales.

In terms of individual titles Fairfax's Sydney Morning Herald's digital gains managed to buffet its overall losses. Overall the paper's sales were down 3.18%, however its digital sales were up 8.14%.

Its print sales were hit hard with the paper losing 15.58% year-on-year.

News Corp's The Australian was in a similar position, with the paper losing 2.27% in total masthead sales, however a 5.97% growth in digital only sales, helped to stave off an 8.69% loss in print.

The Sun-Herald was Fairfax's biggest loser with the title losing 11.56% in terms of total masthead sales.

For News Corp the Northern Territory News Saturday edition was its hardest hit. Not even CAPS and witty headlines could stop the title from losing 14.35% overall year-on-year.

The emma figures indicate similar patterns about which papers are performing strongly, however the focus on readership leads to the numbers being a lot higher.

According to emma the Sydney Morning Herald has extended its lead as the most read newspaper, with the paper drawing a total audience of 5.4 million. The SMH was followed by News Corp-owned The Daily Telegraph, which drew an audience of 4.4 million. 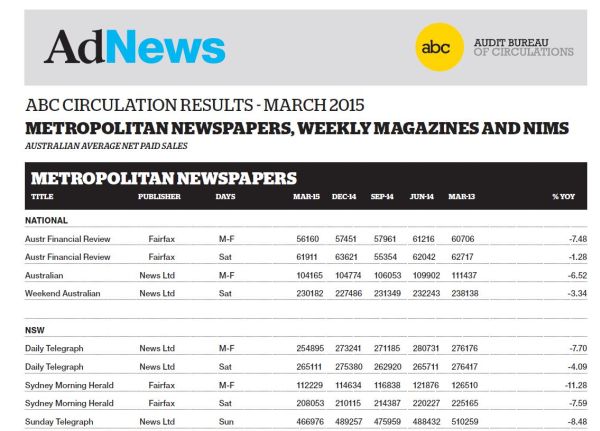