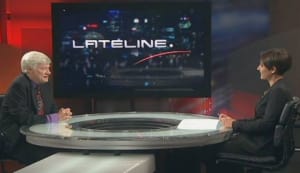 News on what impact the government cuts will have on the ABC is starting to filter out, with 400 jobs set to go along with a slew of programs. But ABC is also investing in digital.

ABC managing director Mark Scott is still addressing staff about the cuts at its Ultimo head office, which was locked down this morning to prevent leaks.

There will be redundancies across the board and regional office closures the main feature of the changes.

Up to 400 jobs, or close to 10% of its workforce is on the redundancy chopping block over the coming months.

Meanwhile, Scott told staff that more than 40 “projects” had been found to increase efficiency and make the ABC a leaner beast.

This include the closing of five regional radio outposts, believed to be Port Augusta, Gladstone, Nowra, Morwell, and Wagin.

It also confirmed that the state-based editions of 7.30 would be axed in favour of a single Friday edition, while Lateline will be moved from the main channel to ABC News 24.

ABC will also shut its Adelaide TV production unit, while getting rid of its outside broadcast TV vans.

It also forecast a scaling back of coverage of regional sporting events.

According to a leaked internal memo release circulating around media circles this morning, The ABC will also create two more divisions with a focus on digital and create a digital investment fund of $20 million.

The full statement circualting is below:

Managing director Mark Scott today announced changes designed to address budget cuts imposed by the Federal Government while ensuring the ABC’s reinvestment priorities remain focused on audience strategy and Charter obligations.
In an address to staff, Mr Scott said the Corporation was committed to using back-office and overhead savings to fund the $207 million that would be cut from the ABC’s budget from July 2015. This cut, announced last week, comes on top of funding reductions of $120 million announced by the Government in May.
The changed funding and media environment has meant that the ABC has had to carefully consider its spending priorities.
“We anticipate that more than 400 people – close to 10 per cent of our ongoing workforce – face potential redundancy as we adjust our activities over coming months,” Mr Scott said.
“We regard the changes as vital to securing the long-term health of the organisation but I acknowledge that is no comfort to those who will lose their positions.”
Today’s announcement includes more than 40 proposed projects aimed at transforming the ABC’s operational base. Key proposals include:
• A comprehensive review of the ABC’s property holdings, with its Lanceley Place site in Sydney to be sold and the closure of five regional radio outposts;
• The closure of the Adelaide television production studio and the winding down of remaining non-news television production in the remaining states; and
• A rationalisation of television outside broadcast vans and a scaling back of television sporting broadcasts.
The ABC has also proposed the creation of two new divisions and a $20 million digital investment fund.
A new Regional division, to operate from mid-2015, will harness the ABC’s skills, knowledge and infrastructure to better serve rural and regional communities. ABC Digital Network will prioritise the ABC’s online and mobile expenditure, ensuring better research and the delivery of products and services that connect with a digital audience.
The announcement today also included details of proposed programming changes in ABC News, Radio and Television. They include:
• A new national 7.30 program on Fridays to replace the current State edition, with extended cross-platform coverage of state and territory issues seven days a week. Moving Lateline to a new fixed timeslot on ABC News 24. Restructuring the ABC’s foreign bureaux to create multiplatform hubs and opening a Beirut post;
• Changes to ABC Local programming, Radio National and ABC Classic FM; and
• An overhaul of ABC TV’s sports coverage, with a focus on national sporting events.
The ABC Board has expressed its support for the changes in a statement released after Mr Scott’s address to staff.
“The initiatives outlined by Mr Scott comprise a carefully considered response to the twin challenges of technological change and reduced funding,” the Board, led by ABC Chairman James Spigelman, said.
“They provide funds to invest in essential new online and mobile strategies that better connect the ABC with its audiences. Like the best media companies across the globe, the ABC is using its digital expertise to achieve deeper and broader audience engagement and relevance.”
Mr Scott will visit ABC branches in each state and territory over the next fortnight to fully brief them on the changes and to answer their questions.
“The message I will convey, both internally and externally, over the next few weeks is that the ABC cannot stand still and run the risk of becoming less relevant and compelling to this and future generations,” he said.
“What we are doing today is in the best interests of the ABC and its many stakeholders. It is designed to position the organisation for the future.
“Working together, we can be confident in our ability to see through these changes and to build a stronger ABC.”
More details on the proposed changes can be found at: http://about.abc.net.au/our-abc-our-future/

Take a walk on the dark side