Social sharing is key to most brands' online strategy, but dark social – when shares aren’t public – is a far bigger deal. On average, for every one post shared publicly on social networks, three 'dark social' shares are made through private channels like SMS messaging, email and instant messaging, according to a report by RadiumOne. It's higher in Australia than elsewhere, and in some top advertising categories as much as 90% of shares are dark.

These aren't usually included in web analytics. The Australian market sees less sharing through social networks than the worldwide average, and other markets including the UK, US and France. (See chart.)

RadiumOne reckons that dark social is one of the “most exciting and potentially lucrative” advertising opportunities for brands.

Brands that are harnessing dark social to engage with audiences outside of media channels are seeing improvements. Universal Music Group improved the performance of its programmatic media campaigns by 300%, by using its dark social data.

The dark social report from RadiumOne released today shows that less than a quarter of all content shared online goes through public channels such as Facebook, despite the emphasis brands put on sharing via social networks. Australia shares more content online than other regions surveyed and is the second-highest for dark social shares, with 95% of people doing it.

Australia also has the second-highest proportion of people that share only through dark channels.

Dark social also represents more than half (53%) of all clickback traffic from shared links in Australia – way above the 16% global average, 23% in the UK and 13% in the US.

Retail, travel, technology, automotive and entertainment categories dominate dark social shares, as the most shared categories. These are also some of the biggest spending advertising categories. 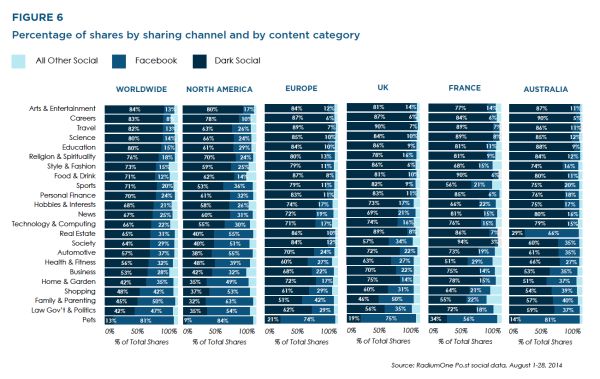 Eight in 10 people share content online, but a third of those do so only through “dark channels” that are beyond the reach of traditional web analytics.

More than a third (36%) of dark social takes place on mobile devices.

The term dark social was coined in 2012 by Alexis C. Madrigal, tech editor at Atlantic.com, to describe when people share content by copying and pasting links, not public posts on social networks.

RadiumOne's report claims that because dark social shares are more intimate than public shares, it offers advertisers “a much more accurate and actionable” view of audience intent and interest than social network sharing.

Update: Facebook has moved to clarify that RadiumOne cannot access or include shares of content through the Facebook mobile app, suggesting a significant volume of shares on the platform are excluded from the data.