A 'victory for the great Australian art of taking the mickey' 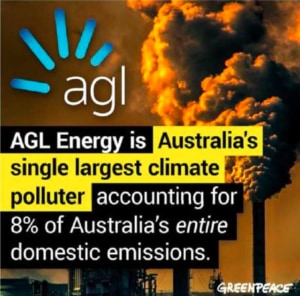 The Federal Court has confirmed that logos and other copyrighted material can be used without infringemement of the owner's rights as long as it is for the purpose of parody or satire.

The case centres around Greenpeace and its use of energy provider AGL’s logo in a campaign against fossil fuels, an act the company alleged was unauthorised use of trademark.

The judge, Justice Stephen Burley, found that Greenpeace’s action was covered under the fair dealing defence of the Copyright Act which allows use of copyrighted material when it is for satire, parody and criticism. News reporting is another exception.

The judge says AGL failed to make its case except for three social media posts, photographs and placards. Greenpeace has said it is happy to change these.

David Ritter, the CEO of Greenpeace Australia Pacific, and a lawyer by profession, says the judgement is a significant victory for the great Australian art of taking the mickey, and for freedom of speech.

"It paves the way for charities and advocacy organisations to continue to hold powerful corporations to account," he says.

Greenpeace had used a logo and tagline, AGL - Australia's Greatest Liability, and described the company as Australia’s "biggest climate polluter".

The judge: “In my view the deliberate reproduction of the AGL logo does not amount to flagrant infringement.”

The use of the modified AGL logo was to identify that brand, and the company that it represents, as the subject of criticism.

Consumers would not think Greenpeace was promoting or associating any goods or services by reference to the AGL logo, said the judge.

In advertising, the path to parodying a competitor is well worn. The most recent example of this is Koala with cheeky swipe at self assembly furniture competitors.

In 2006, when section 41A was introduced into the Copyright Act, the exception to the law was designed to promote "free speech" and to allow comedians and cartoonists the use of copyright material for parody or satire.

Senator Chris Ellison, in parliament: "The government is also ensuring that Australia’s fine tradition of poking fun at itself and others will not be unnecessarily restricted ... "

David Ritter at Greenpeace says that at no stage in this latest case was AGL’s status as Australia’s number one domestic climate polluter an issue.

“AGL were not disputing that truth," he says.

“They were suing Greenpeace because they were saying that we had infringed their intellectual property rights.

“What the judge has just found was that Greenpeace’s parodying of the AGL logo is entirely fair.

The Greenpeace campaign: “AGL proudly advertises itself to the Australian public as green and environmentally responsible. But a deeper dive into the company reveals the truth couldn’t be more different to its carefully crafted public image.

“AGL is Australia’s number one climate polluter, and it’s not even close. 85% of their electricity comes from burning dirty coal, meaning they emit more than double the next biggest polluter."

An AGL spokeswoman: "AGL welcomes the injunction that was granted relating to certain instances of unauthorised use by Greenpeace of AGL’s logo.

"As we’ve always made clear, this legal action was about the integrity of how our brand is used.

"We regularly engage with Greenpeace to discuss their concerns and acknowledge the important role activist organisations play in holding organisations and governments to account.

"We look forward to our continued engagement with Greenpeace on these important issues and welcome the opportunity to be part of the public debate in relation to climate and how we can work together to deliver Australia’s energy transition.

"AGL understands its role as Australia’s largest integrated energy generator to lead the energy transition while continuing to deliver reliable and affordable energy."