A look through 10 years of MLA's epic summer ads 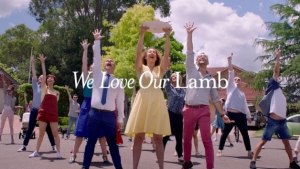 The highly-anticipated Meat and Livestock Australia (MLA) summer campaign drops today so we’re taking a look back at its history.

After 10 years of Kekovich berating Australians, the brand moved on to other big names, such as cricket commentator Richie Benaud in the 2015 ‘You’ll Never Lamb Alone’ ad.

In the spot, created by The Monkeys, he rounds up other Aussie icons, including journalist Ita Buttrose, Captain James Cook, cricketer Don Bradman and, of course, former ‘Lambassador’ Kekovich, for a BBQ at his place.

In 2017 MLA split from Australia Day, following increasing criticism the date marks the start of British colonialism and backlash from the Indigenous community. However, the ad still made a political point and celebrated the diversity of Australia’s history.

Last year it released a musical-themed ‘Lamb Side Story’ ad, which continued to push for inclusion.

In the spot, left and right wing factions were pitted against each other and touched on issues such as global warming, same-sex marriage and gender diversity.