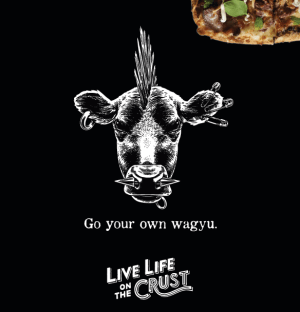 Crust Pizza has appointed 303 MullenLowe as its creative partner and its media offering, Mediahub, as its media agency.

It's the latest win for Mediahub Australia, which has also added Laser Clinics Australia and Magellan to its client base since merging globally with 303 MullenLowe.

The agencies have launched their first work for the business, ‘Live Life on the Crust’, a campaign that positions Crust Pizza as a challenger to the traditional pizza flavours.

As part of the campaign, Three TV ads feature three of the pizza bar's unique flavours, each backed by a different theme - 'Prawn to be wild', 'Let's play devil's avocado' and 'Go your own wagyu'.

“From the outset, Mediahub and 303 MullenLowe have worked together to deliver a campaign that will not only engage our customers but impassion our franchise partners and their staff," Crust Pizza divisional marketing manager Zoe Jacovou says.

"‘Live life on the Crust’ is a positioning that feels true to the DNA of our brand, and our franchise partners have really embraced it."

“We have loved working with the Crust team in the lead up to today’s launch. It felt from the get-go like a partnership that had the potential to stretch beyond pure communications and impact the wider business strategy and customer journey, pulling in all areas of our agency," Mediahub MD Andrew Livingston says.

303 MullenLowe merged globally with Mediahub this time last year, with the expanded media offer headed up by MD Andrew Livingston, who joined 303 MullenLowe in January 2017.

Mediahub global president John Moore recently told AdNews that the Australian market was an ideal market for the company because of the strong similarities to the US.

"We looked at it around six years ago that if we had remained Mullen Media [in the US], we were probably, from a perception stand point and reality stand point, going to wither at the vines," Moore says.

"Where Mediahub Australia can position itself is exactly where Mediahub US positioned itself five years ago. This is as a media shop of challenger brands, brands that don't spend the most money in the category and brands that believe in creativity at the heart of media solutions."

Livingstone added that the Australian market size was not going to be a major factor for the agency, based on the typical client it would look to work with.

"We're never going to compete with P&G or probably Westpac. They are very big clients that would need a bigger organisational structure. Anything sub $20 million is where we are really interested in," he says.