13CABS takes swipe at Uber in first work from Thinkerbell 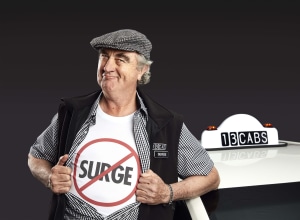 13CABS has released its first work from Thinkerbell after appointing the agency in July this year.

In a not-so-subtle swipe at Uber, the campaign reminds people that while ride-sharing companies continue to use surge pricing in times of high demand, 13CABS do not.

It aims to win back some of the business Uber has cannabilised from the taxi industry in recent years.

The campaign introduces 13CABS driver Serge who warns commuters about the perils of surge pricing in a series of ads.

He says: "The only surge you'll ever see with 13CABS is me!"

The ads will be placed during peak times, such as Friday nights and traffic jams.

The ads are strategically placed around peak surge time

"When the trains in Melbourne went down a few weeks back, a certain ride-sharing company surged their prices by 3.6x.

"We want everyone to know that with 13CABS, there’s no surge pricing, just Serge driving. On that note, 13CABS actually has a lot of drivers named Serge – so the campaign not only communicates a timely message, but also gets the message out in a fun way."

The Serge campaign kicks off today with digital advertising and is the first cab off the rank for 13CABS’s new communications approach.

It's the first work that has been released from Thinkerbell since the agency officially opened up shop this year.

Thinkerbell co-founder Adam Ferrier adds: “The communications strategy primarily uses a digital approach with support in outdoor and radio. There’s oodles of contextually relevant content, all created to deliver the right message to the right location, at the right time.”

“We love our Driver Serge, he’s helping us tell an important story to our Passengers – don’t put up with surge pricing," 13CABS head of marketing Liz Attia says.