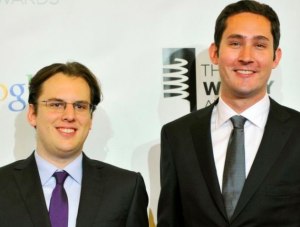 Instagram’s co-founders Mike Krieger and Kevin Systrom are leaving Facebook six years after the pair sold the company for $1bn (A$1.38bn) to the social media giant.

Systrom, the CEO, said they were leaving to build something new after helping the platform grow to more than a billion users. The move follows the April departure of WhatsApp founder Jan Koum.

Reports alledge the pair are leaving the company they built due to mounting tensions between Systrom and Facebook boss Mark Zuckerberg.

According to reports,Systrom’s influence within the Facebook hierarchy had declined over time and he didn’t agree with some of the decisions being imposed on Instagram such as the number of ads on the platform.

He also didn't approve of Zuckerberg's involvement in the company, which had increased over time as Facebook become more reliant on the photo-sharing app.

“We’ve grown from 13 people to over a thousand with offices around the world, all while building products used and loved by a community of over one billion. We’re now ready for our next chapter."

“We’re planning on leaving Instagram to explore our curiosity and creativity again. Building new things requires that we step back, understand what inspires us and match that with what the world needs; that’s what we plan to do.”

Systrom, 34, and chief technology officer Krieger, 32, set up the photo sharing platform in 2010. In recent years it has been successful in copying and improving the best features of rival platform Snapchat.