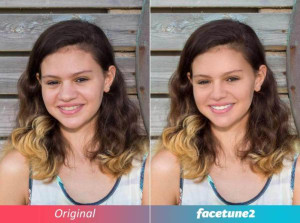 The ad was for popular photo-editing app Facetune

An Instagram ad for photo-editing app Facetune has been slammed as "disgusting", "messed up" and "terrible" for encouraging women to alter their faces to get a "good selfie".

The sponsored ad is currently running on Instagram and is being targeted at young women under 25.

The short spot shows a young female whiten her teeth, shrink her nose and widen her eyes. View the gallery below for a series of screenshots of the ad.

The caption reads: "Ever wonder why your friends' selfies look so good?" and encourages users to download the app.

Women said they were "offended" to be targeted with the ad, with others commenting they "hated" the spot.

Following the backlash, Facetune has turned off the ability to comment on the paid ad.

The ad follows a similar format to this Facetune ad

Facetune launched in 2013 to capitalise on the Instagram economy, removing pores, lines and pimples and nipping waists to help young women perpetuate a false idea of perfection on the app.

Since its launch, it's been downloaded more than 50 times and endorsed by a swarm of Instagram influencers and celebrities including Khloe Kardashian.

The original iteration of the app, Facetune, cost $3.99, and was the most popular paid app of 2017. The latest version, called Facetune 2, is now free to download but charges $5.99 per month to unlock all features.

As the app has grown in popularity, psychologists have warned about its impacts on impressionable teens.

According to a recent study published in the International Journal of Eating Disorders, 91% of teens who use social media post photos of themselves. Moreover, the study concluded that those with high scores for manipulating their photos also were associated with high scores for body-related and eating concerns.

Instagram, which declined to comment on the current Facetune ads, approves all advertising on its platform through a set of guidelines that aims to protect its community.

A screenshot of the backlash