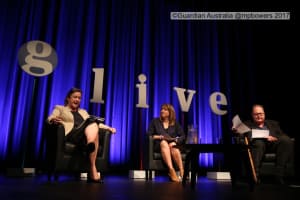 The rise of the digital duopoly, Facebook and Google, threatens the future of media outlets that rely on advertising revenue to support high quality journalism, The Guardian's editor-in-chief Katharine Viner has warned.

Facebook and Google hive off 85 cents of every new ad dollar that previously supported strong journalism.

“People thought the internet would democratise publishing but in fact it took the power from a few and gave it to two [Google and Facebook], without any of the responsibility or accountability of the old gate keepers,” Viner said.

Viner said that some news organisations, desperate to compete in a shrinking ad market, are making matters worse by valuing work that delivers clicks above quality journalism.

“The business model for digital is based on clicks rather than quality. You get more money from advertisers for the more clicks you get,” Viner said last night at a Guardian Live event in Sydney.

“Commercial news organisations are falling into the trap of publishing click bait - cheap material that doesn’t serve their audience or society but services the click economy of the internet."

She expressed concern that brands no longer care what type of content their ads sit beside, which was seen this week with Australian brands placing ads on YouTube alongside content from alt-right groups and videos sympathetic to Islamic terrorism.

Viner took aim at Facebook’s business model, adding the business could easily build an algorithm that identified quality journalism, but instead chooses to use the data it mines to create “filter bubbles”.

“Every time you perform any action on Facebook you are doing their work for them by feeding their algorithm that makes their profit,” she said.

This is not the first time Viner has spoken out against Facebook, however it is worth noting The Guardian continues to push its content across the social media platform and take advantage of it as a distribution channel to attain reach.

Viner admitted The Guardian does not make revenue from its content being shared on Facebook, but noted it plays an important role in the company’s growth.

“It’s a complicated relationship… We have this gigantic reach around the world because of Facebook and Google.

When asked what The Guardian can do to change the relationship between publishers and Facebook, Viner said: “I’m not sure how crucial news organisations are to Mark Zuckerberg. To him it’s just about content, not good or factual content.”

BuzzFeed’s decision to publish an “unverified” report alleging Donald Trump took part in golden showers with prostitutes was called into question by Viner, who said The Guardian along with other publishers decided not to publish the document until they could verify the information.

Viner suggested BuzzFeed should have published the document with annotations that noted which parts of the report had not been verified, criticising the credibility of its newsroom.

“Journalism exists to hold the powerful accountable, which is hard to do at the moment,” Viner said.

With the influx of fake news surrounding the recent US election and also Brexit last year, as well as poor standards of journalism, questions were raised if more media skills need to be taught in schools, so individuals can better identify trustworthy news sources.

“The way everything looks the same on Facebook makes it very hard for people to differentiate between content,” Viner says.

Another threat to the credibility of media and the dissemination of true and factual information is the ever more sophisticated targeting of messages.

Political parties are increasingly using data to target the public with personalised messages - a tactic long used by brands and advertisers on digital platforms.

Viner said that the ability to target people on Facebook with political messages is “unsettling” and “sinister”.

“The problem with it is nobody can see targeted political ads. We can critique policies but don’t know what truths are being communicated in targeted ads.”