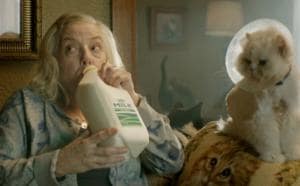 A still from one of DDB's previous campaigns

The dairy products company confirmed earlier this month that it would no longer work with DDB. TBWA Melbourne also pitched for the business.

DDB halted work for the company back in February 2016 when the review was announced. AdNews understands the review process was delayed due to the departure of GM of marketing, Suzanne Douglas, dragging on for nearly a year.

Peter Gardner replaced Douglas in mid-2016 as the GM of marketing and innovation.

Sources close to Devondale tell AdNews it wanted to take a more traditional approach with its advertising.

DDB was the agency behind a slew of award-winning campaigns, including the ‘Soy Aftertaste’ campaign released in 2013. The ad won AdNews Ad Campaign of the Year in 2014.