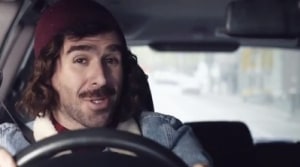 Carsales has launched a new campaign that will create an ad for every user looking to sell their car on its site.

The campaign, titled AutoAds and created by CHE Proximity, wants every private seller to experience the luxury of a sexy car ad.

To help the idea come to life, CHE Proximity teamed up with award winning comedy director Tony Rogers and actor Kai Smythe, creating hundreds of scenes and thousands of clips ready to go.

The filmed footage is combined with the seller’s own photographs of their car via a purpose-built algorithm that automatically pulls in the seller’s name, car type, price and odometer reading.

The first campaign of its type for the Australian auto category has the potential to produce 1.2 trillion unique car commercials, with no two ads ever the same.

Not only will the cars and consumer details be unique to each ad, but the algorithm seamlessly rearranges the footage and script with different lines and visuals.

After listing their car at Carsales, each seller receives five uniquely themed 40-second ads to choose from and post on their social pages. The themes sellers can choose from include family, tough, luxury, city and adventure.

Ant White, who was recently promoted to chief creative officer of CHE Proximity, says the creation of AutoAds was a true collaboration between all involved.

“Tony Rogers and Guilty worked with the team’s dynamic script that had thousands of unique lines and nuances. The tech, data, design and production teams stitched it all together seamlessly with the smarts hidden in the background,” White says.

“With social communities playing such a big part in our everyday lives, the fun and personalised nature of this campaign is a unique and engaging way for our private sellers to get the word out that their car is up for sale," she says.