Suzuki Australia has announced its new Baleno will feature a communication device that will allow the vehicle to talk to drivers and passengers.

Harnessing the exact same technology that can be found in singing birthday cards, Das Talkomobile upgrades can be effortlessly installed in the new Baleno’s glovebox, centre console, under the sun visor and in the boot.

The device takes aim at the current car market climate, where manufacturers continue to add superfluous gimmicks and gadgets to their vehicles in order to sell units.

“Although packed with all the modern necessities, the new Suzuki Baleno is excellently priced because it doesn’t have the gimmicky features that tend to put the price up," Deloitte chief creative officer Matt Lawson says.

"Well, until now. This campaign is set in a parallel world, a world where Suzuki does gimmicks…and has a German accent.”

"It's early days, but from the teaser phase we've already seen huge engagement from our audience in a really positive way,” Mercuri says.

The Talkomobile campaign will be promoted on TV, online, socials, radio, podcast and website.

The free talking card upgrade is available in dealerships for Baleno now. 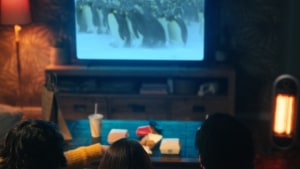 Winter is better together with McDonald’s via DDB Sydney

Jack Nunn, DDB Sydney CD: “Any season that embraces a bit of Macca’s on the couch with mates is pretty good."