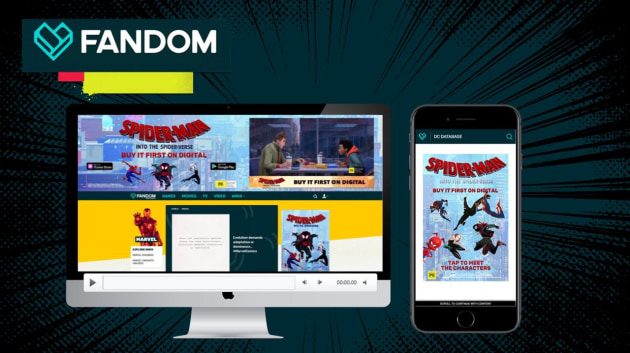 Fandom and VMO have joined forces to create custom cross-platform content for the home entertainment release of Spider-Man: Into the Spider-Verse.

Entertainment site Fandom has joined forces with digital out-of-home network VMO to create custom cross-platform content for the home entertainment release of Spider-Man: Into the Spider-Verse.

Created entirely by the in-house creative and production team, VMO and Fandom developed a series of bespoke, digital character cards that introduced superhero fans and shoppers alike to the film's lead characters.

The first phase of the campaign saw the creatives showcased across the Fandom site, reaching over 300,000 fan with a dynamic mobile 'inter-scroller'.

Users were able to engage with the film's characters, view the trailer and click through a 'buy it first on digital' feature.

In the second stage of the campaign, VMO's digital retail network was added to the mix with 121 of VMO's proximity and large-format 'impact' screens for a two-week period.

VMO's proprietary audience insights tool 'dart360' enabled the campaign to be highly-targeted, delivering the message just metres from key retailers and in locations over-indexed with shoppers searching for 'Spider-Man' and super-hero related terms on their mobile phones.

The media execution, including the strategy and planning was done by Slingshot in partnership with Universal Sony Pictures Home Entertainment.

"In this instance, we’ve seen a powerful combination of Outdoor and online channels working together to drive sales," Butler says.

The VMO retail network is in 400 locations and reaches a unique audience of 10 million shoppers weekly.