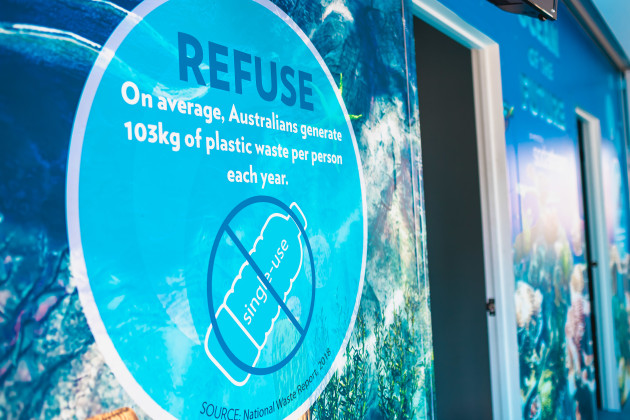 The Aussie model will front the Ocean of the Future campaign, which aims to raise awareness of the single-use plastic waste epidemic.

Australian model and sustainability frontier Elyse Knowles has been named as SodaStream Australia’s latest ambassador for its Ocean of the Future campaign, which aims to raise awareness of the single-use plastic waste epidemic in Australia.

Renowned for her deep love of the ocean and living a sustainably-conscious lifestyle, Elyse has joined the initiative following new research, commissioned by SodaStream, which reveals just how deeply Australians feel impacted by the growing issue of single-use plastic waste.

The findings highlight that the epidemic is taking its toll on children’s wellbeing, with 82% admitting to feeling hopeless about plastic waste, and 32% feeling like there isn’t much they can do to make a meaningful impact.

93% of Australian parents said that they are increasingly concerned about the level of plastic waste entering our oceans, with plastic pollution ranking as the fourth biggest concern for them, after housing affordability, 70%, crime, 52%, and having a well-paid job, 51%.

While 69% of households have done something significant to reduce their plastic use, only one in five parents are setting a good example for their children by stopping their use of single-use plastics.

Australians are spending $385 million dollars on more than 726 million litres of bottled water every year – despite living in a country with some of the best and cleanest tap water in the world.

In partnership with SodaStream, Elyse will be rallying Aussies to save the ocean from plastic waste:

“The fight against plastic waste is one I’m incredibly passionate about. Whether I’m going for a dip in the ocean, hiking, or spending the weekend camping, I’ve always had a love for nature – and it makes me very sad to see its beauty deteriorate because of our behaviours which urgently need changing.”

To help all Australians recognise that recycling isn’t enough, that they need to act now to change their consumption behaviours, and help our ocean and therefore our future, Elyse is working with SodaStream as it launches its world-first Ocean of the Future Virtual Reality experience, which aims to highlight the devastating effects of single-use plastic waste in our ocean.

The activation immerses participants in a virtual underwater environment, where they are confronted with a real-life representation of the ocean, which they have to clean up amidst an overwhelming onslaught of plastic waste.

“We know Elyse has always tried to live a sustainably conscious lifestyle, and we’ve closely followed her journey. We’re thrilled to be partnering with someone as passionate about the issue as we are, and hope that other Australians will follow-suit with the example Elyse leads," SodaStream Australia marketing director, Laura Wilson, says.

"We created our Ocean of the Future VR experience so that more Australian’s can not only see, but through the magic of VR, experience the sheer scale of the plastic waste issue first hand. We truly believe that by doing so, users will better connect with the problem and therefore be moved to make changes in their consumption habits.”

Members of the public can see the impact of the single-use plastic waste epidemic for themselves through the magic of Virtual Reality at SodaStream’s Ocean of the Future experience, from 3 until 7 September, 2019 at The Overseas Passenger Terminal on Sydney’s Circular Quay.

Also available to view at the site is a turtle sculpture, named Eddy - because “Eddy” is also the name of an undercurrent that moves plastic around the ocean - created from over 242g of reclaimed and repurposed single-use Oceans plastics collected from around turtle settlements in Northern Queensland.

The sculpture was created by Australian reclaimed plastics Artist, David Day, together with Melbourne based Lump Sculpture Studios.