A new campaign by Queensland University of Technology (QUT) via BCM Group takes QUT’s long-established ‘Real World’ positioning to the next level in a fast-paced and striking visual narrative that follows the journey of real students on their epic race to success.

Directed by filmmaker Mark Toia, The Real World Starts Here campaign, delivered as 30 and 60-second films, is timed to the voice of a young slam poet, who’s words carry us from the students' very first day, through a dynamic series of student experiences on campus and out in the world, to a crescendo of career excitement and reward.

QUT executive director of marketing and communications Xavier Amouroux says it was important for this year’s campaign to bring new meaning to the real world that spoke to the university’s practical hands-on learning environment and demonstrated how the QUT student experience differed to other universities.

“We created this campaign to show students that we really can match their aspirations and ambition," Amouroux says.

"That their futures will be bright, and QUT is positioning itself as the university for the real world."

BCM creative duo Nick Ikonomou and Mike Rolfe say slam poetry was the perfect way to write a script that embodied the energy and excitement of students making a mark on the post-pandemic world.

“It’s been a welcoming challenge to forge a new campaign that takes QUT’s long-established ‘Real World’ positioning to the next level. It’s a big hit of energy, attitude and unashamedly reaffirms QUT as the leaders in real-world learning,” they say.

BCM managing director and partner Phil McDonald says bringing the campaign to life was a collaborative process with the QUT team.

The work zeros in on the unique, competitive advantage that QUT has over competitors, taking the form of an amazing film and a range of digital assets that will cut through on screens of all shapes and sizes and right throughout the consumer journey,” McDonald says. 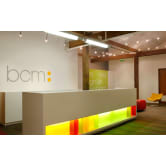