PETA calls on the government to end cruel tests on animals 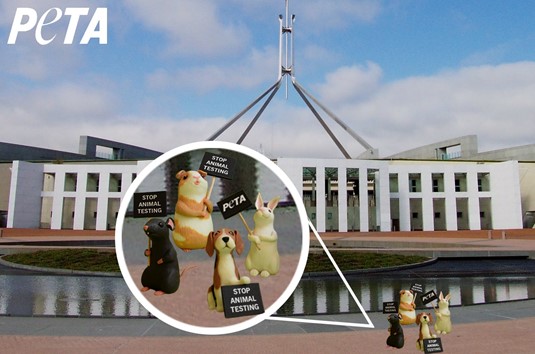 The organisation held a virtual protest with an army of adorable animal figurines.

Despite social distancing (or because of it), PETA held a virtual protest with an army of adorable animal figurines in Sydney, Melbourne, Brisbane, Canberra, Byron Bay and the Gold Coast to mark World Day for Animals in Laboratories.

Similar protests will be held around the world, from Paris to London.

Animals in laboratories suffer on a massive scale: millions of animals are used in research and teaching in Australia.

Many – including mice, rats, guinea pigs, dogs, cats, and horses – are poisoned, burned, cut into, emotionally traumatised, forced to swim for survival, or infected with diseases.

They are also used as breeding machines, killed for their body parts, or left to languish in cages for their entire lives.

Yet studies show that 90% of basic research – most of which involves experiments on animals – fails to deliver treatments for humans.

"The government has a moral obligation to advance human health, and it can do so more effectively by recognising the delays caused by flawed experiments on animals.

"To provide effective treatments and vaccines urgently required by patients in need today, it's vital that we switch to innovative human-relevant technology and there’s no better place to start than with coronavirus vaccine testing."

PETA is calling on the government to commit to phasing out all animal experiments and redirecting resources to superior, non-animal methods such as sophisticated tests using human cells and tissues and advanced computer-modelling techniques that would benefit humans and animals alike.

PETA opposes speciesism, which is a human-supremacist worldview.