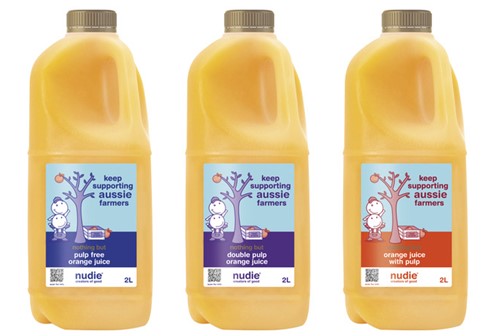 The juice brand is launching a QR code on juice bottles to educate Australians about the plight of farmers.

Nudie Juice is urging Australians to support struggling orange farmers whose businesses have been devastated by recent ongoing and extreme weather conditions.

At the beginning of the orange season, the fruit juice company is also warning customers to be patient after predicting far lower supplies of orange juice this winter.

Months of extreme weather including a long drought and heatwaves have decimated the Valencia orange crops Nudie uses for it’s 100% orange juice, with some citrus growers reporting they are making more money from trading water than growing orange crops.

Griffith farmer Frank Violi says this is the worst year he has ever seen, with some farmers reporting no oranges at all to farm, turning to selling water just to stay in business.

“When the crop is low, it’s not worth putting the water on the crop as farmers get more money from selling the water than they would from growing their crop and that’s before they even buy fertilisers,” Violi says.

“During summer, we had 20 days where it was over 40 degrees. Usually the oranges keep falling off until January but with the heat we had in December, the oranges on the trees were no bigger than a five or ten cent coin, they just cooked on the tree and dropped off.”

Nudie head of brand marketing Brooke Parker says some fruit growers have lost more than 40% of their crops.

“We deal with growers around the Riverina, Sunraysia and Riverland areas of Victoria and NSW. All of these growers have been impacted to some degree and are feeling the financial strain,” Parker says.

To educate Australians about the plight of farmers, from next month Nudie will be connecting juice buyers with the impacted farmers via a QR code on each juice bottle that launches a video featuring footage of the farms and stories from the farmers themselves.

With Valencia orange volumes down by 40%, Nudie has had to raise the price of its juice bottles to cover rising costs and keep the growers in business.

“We are committed to keeping the industry alive,” Parker says.

“The price we are now paying for premium oranges includes higher costs to support them during these challenging times when yields are lower and the cost of running their business is higher.”

Approximately 21 oranges are required to make a 2-litre bottle of nudie orange juice.

However, due to the current orange shortage consumers are asked to be patient if they can’t find nudie juice on supermarket shelves on some days.

“Australia’s orange farmers desperately need our support, and we are committed to continuing to manufacture Nudie Juice from 100% juice sourced from Australian farmers,” Parker says.