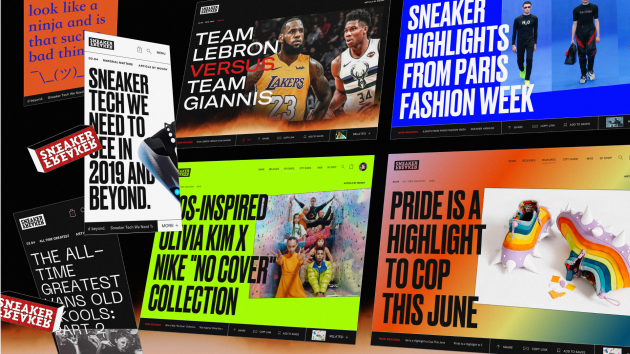 Founded in 2002, the street culture magazine is the first and only international footwear magazine.

Loved by sneakerheads all over the world, and with a huge global fan base, Sneaker Freaker is highly regarded as the source of sneaker truth.

The fresh new design was influenced by the ‘cult’ status of the magazine itself, and it’s a total departure from the previous site.

In a massive project spanning 18 months, Nightjar worked with Sneaker Freaker to create a site as entertaining as the mag itself, powered by a heavy-weight back end fuelled by data.

The new site takes user profile data to algorithmically generate a ‘For You’ feed, serving up personal sneaker preferences on the user’s own, unique homepage.

This also integrates with the CRM platform, and has been engineered to create automated newsletters for sneakerheads, delivering the most popular articles of the week, and exponentially increasing efficiencies for the content team.

SneakerFreaker.com planned to take their advertising model to the next level, so we introduced dynamic ad placements with targeting parameters based on the content the user is viewing, as well as integrated affiliate links within the latest releases calendar - driving sales for Sneaker Freaker’s partners.

There’s a focus on the in-depth, immersive feature articles Sneaker Freaker is famous for, (even the ability to vote using WebGL-powered fire) while still keeping the flowing feed of everyday sneaker news and upcoming releases easy to access on the site - as sneakerheads know, recency is currency in the sneaker game.

“Nightjar’s platform-first approach allowed us to build an architecture that was as flexible as it was scalable," Nightjar head of design and technology Ahmed Meer says.

"We safely migrated twenty years of content over, and engineered the CMS to suit the content editor’s unique requirements. An API-led approach allows the platform to integrate into any channel pushing content, personalisation and automation to a whole new level.

"This is a platform that puts the power in the fan’s hands and enables the content team to move faster than ever before.”