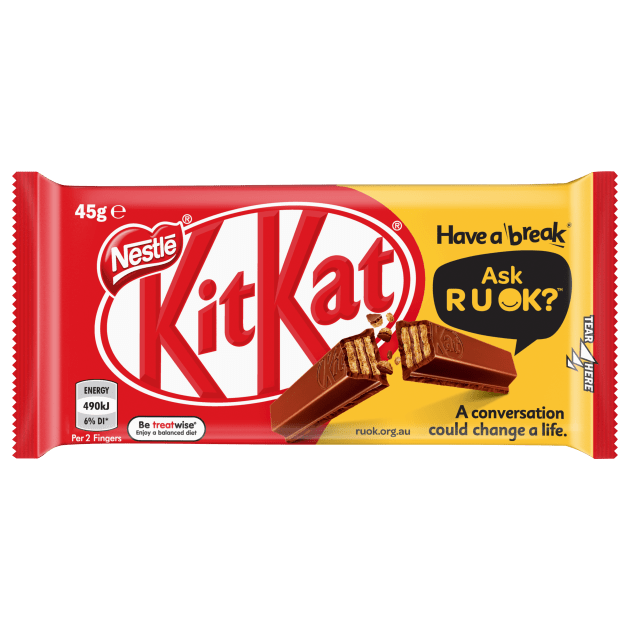 As an official ‘Chit-Chat’ partner for R U OK?, KitKat is encouraging people to not just ‘Have a Break’, but to take their break one step further to support R U OK? in driving conversations that could change a life.

To support R U OK? Day on September 10, limited-edition KitKat wrappers will carry R U OK? labelling reminding Aussies to have a break and use the time to ask their friends, family and colleagues, “Are you OK?”.

The KitKat team will help raise awareness for the charity’s 2020 campaign focus of "There’s more to say after R U OK?" which shows people how to keep the conversation going when someone says they’re not OK.

“As a brand, KitKat is synonymous with taking a break; whether it’s at work or at home, long or short, it’s important to take some time out," Nestlé head of marketing confectionery Joyce Tan says.

"How that time is spent is also important, which is why we’re proud to partner with R U OK? and encourage people to use this time to have a meaningful chit-chat that could make a difference.

“We’ve long seen people use KitKat bars as a catalyst to have a break, so we hope by joining forces with R U OK? we can encourage people to use these breaks to drive genuine conversations between people.”

R U OK? CEO Katherine Newton says the charity welcomes the support of KitKat as its Chit-Chat Partner.

“Making time for the people in your world can make a real difference and sharing a break is a great opportunity to pause, consider others, and start a meaningful conversation," Newton says.

"We hope as our ‘Chit-Chat Partner’, KitKat will be the catalyst for many important chats.”

The R U OK? four-finger KitKat will be available for a limited time in major grocery stores at the end of August.