With circus music playing in the background and two images of Bill Shorten, the attack ad is designed to highlight the opposition leader's changing positions.

The text reads: "Bill Shorten has no plan for Australia. In fact, he can't even agree with himself."

The ad shows several situations where Shorten has contradicted himself, including footage of Shorten advocating for lowering company tax rates juxtaposed against Shorten speaking at a press conference last month arguing "it is not the right time for corporate tax cuts".

Also shown is Shorten performing some interesting dance moves during a visit to Kiribati in November last year.

In the other spots from Liberal, Malcolm Turnbull fronts the majority of the campaign ads focusing on policies such as the “innovation economy”. 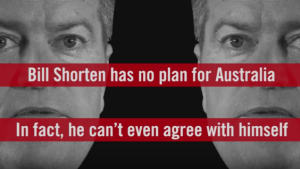