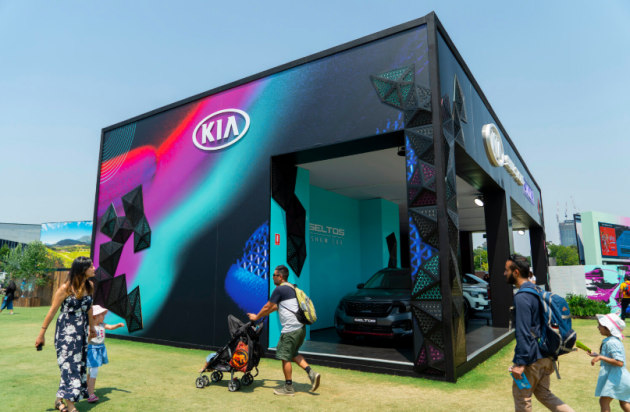 Bastion EBA built a multi-sensory experience for the car brand.

Marking its 19th year as the major partner of the Australian Open, Kia has used the event to launch a car.

This year it’s their first small SUV, the Seltos - a car that’s bolder in terms of design and features and aimed at catering to a younger audience who over index in urban aesthetics.

To engage this more discerning audience, rather than building a typical auto experience, Bastion EBA built ‘Kia Seltos Studios’, a multi-sensory experience that invites AO fans to step inside the Kia Seltos universe and experience deconstructed elements of the car's design.

Neon signs and changing wall colours give onlookers a first-hand feel of the mood-lighting feature and draw attention from across the grounds.

The hero of the activation is ‘Beat The Beat’ which brings together an amalgam of the Seltos features in a digital game that challenges guests to stomp digital tennis balls to speed up their virtual Seltos.

After week one Kia were close to recording their fortnight consumer target for the Kia Seltos Studios activation.

“The Aus Open is the vanguard for sponsor activations in Australia and this year Seltos Studios is at its epicentre," Kia Motors Australia general manager - marketing Dean Norbiato says.

"For us, it’s about shifting brand perception and using our sub brands, like Seltos, in fresh and unique experiential ways to hero our master brand.”

Whilst Kia Seltos Studios is the hero consumer activation, multiple other touch points inside and outside of the Tennis Australia precinct come together throughout the Australian Open period working simultaneously to drive awareness of and engagement with the Kia brand.

The appearance saw Rafa hand over the keys to the fleet of Kia cars that are fundamental in moving players and officials around Melbourne throughout the tournament.

The campaign was also amplified by Kia Surprise Sunday.

This year falling on Australia Day, EBA composed Kia Tricks Squads, who gave fans a chance to win spot prizes and the opportunity to participate alongside renowned Serbian trickster Stefan Bojic, for their chance to win a 2021 Australian Open VIP experience.

Two Seltos car displays in Federation Square and Garden Square North completed the campaign where fans could get a selfie with the custom Rafael Nadal bobblehead.

The campaign was further amplified by the KIA Fan Fleet partnership with Uber, giving fans the chance for free Uber trips to the tennis throughout the tournament.

This campaign is an example of true integration from the ATL spot that plays across broadcast, right through to the look and feel of Kia Seltos Studios and the designs of each car display.

The sleek design of each execution is an encapsulation of the new Seltos, aimed at a younger urban audience who value the tech and spec of this progressive new model.

Each decision was made with this consumer in mind, and the result is a consumer led campaign that caters to their passion points and lifestyle choices.

The campaign came to life via The Idea Shed.