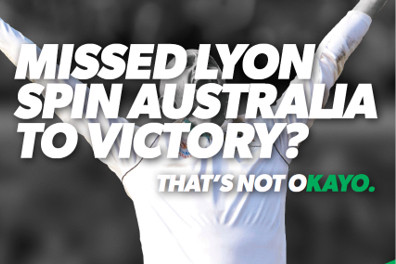 If you’re missing the cricket, that’s not O-Kayo, with Kayo Sports’ latest brand creative reminding Aussies that with Kayo, you don’t have to miss a moment of the action this summer.

The That’s not O-Kayo creative will appear in OOH, radio and digital during the Australia v New Zealand Domain Test Series.

The creative will focus on some of the record-breaking highlights from the Pakistan series, with the text obscuring the memorable moment in question.

Digital and radio creative will continue to be updated to reflect the history-making moments in the New Zealand series.

With the first Test starting this week, Kayo has teamed up with The Daily Telegraph, The Herald Sun, The Courier Mail and The Adelaide Advertiser to offer new Kayo customers one month free of Kayo Basic when they purchase a newspaper from one of the participating mastheads on Wednesday, December 11.