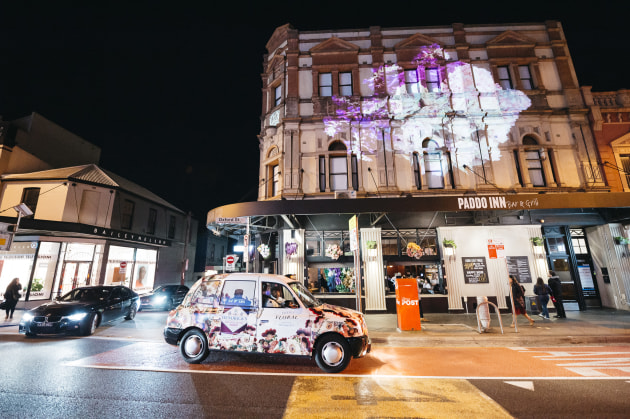 To promote the launch of Hendrick’s first innovation in Australia since arriving on our shores some 20 years ago, Adflow partnered with Posterscope to deliver a British-inspired London Cab launch.

It hired smartly dressed drivers for a week-long activation driving the botanical wrapped cabs from beaches to bars stopping to collect influencers and lucky punters on route to iconic Sydney bars.

“The taxis were a beautiful way to bring the floral notes of Hendrick’s Midsummer Solstice to the streets of Sydney in a way that perfectly fused the uniquely peculiar Hendrick’s creative with an impactful and engaging format," Posterscope business director Jay Patel says.

"The taxis also provided a beautiful and surprising way to greet guests at the launch event."

Lucky Sydneysiders were surprised with a free rose and cab ride to their favourite Hendrick’s watering hole where they could collect a free drink.

“Our ambition was to take over the city with blossoming florals to drive curiosity, awareness and engagement…we brought to life the essence of the Midsummer Solstice in iconic destinations and delivered an explosion of summer blooms to the streets of Sydney, with a classic Hendrick’s twist," Hendricks senior brand manager Lucy Russel says.

Adflow complemented the campaign with Digital Taxi tops across Sydney.

Taxi top advertising and full taxi wraps catch busy consumers attention while they are on the go in key commuter locations.

"We have 100 London Cabs on offer in Sydney, Melbourne and Perth. They are a premium product that looks fantastic when branded or used in conjunction with an activation or sampling campaign such as the Hendricks promotion."

The fleet of 4,600 cabs and ride share vehicles can be used in a variety of ways to bring a brand to life.