Grill'd takes on fast food giants ahead of US election 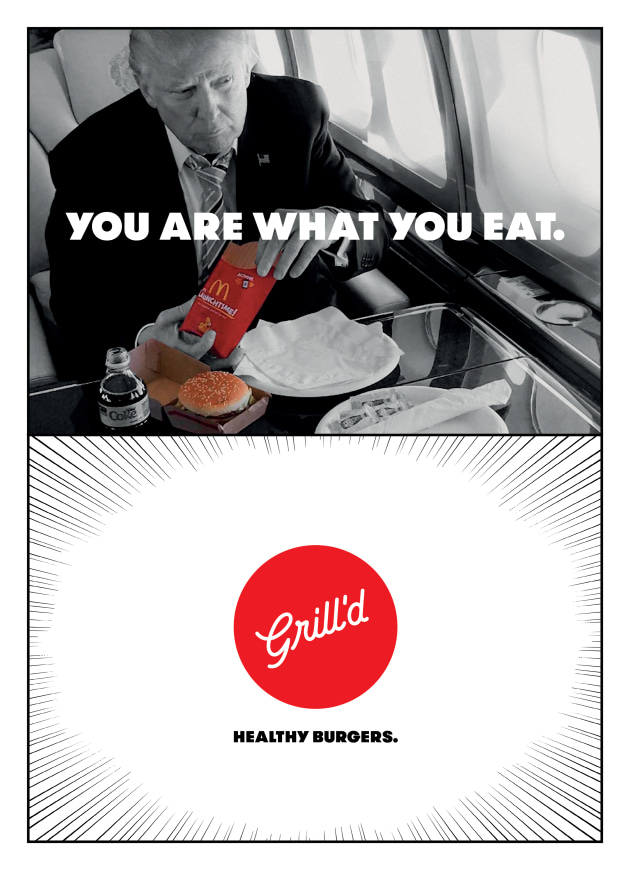 Grill’d has launched a new tactical campaign ahead of the upcoming US elections, with the aim of comparing big American fast food giants with Grill’d’s home-grown, healthier approach to burgers.

The tongue-in-cheek campaign depicts Donald Trump’s addiction to fast food options, such as McDonald’s, KFC, Burger King and Dominos, with the words ‘You are what you eat’.

In the lead up to the US elections, Grill’d’s ‘Trump’d’ campaign posters appeared in Melbourne and Sydney CBDs and surrounds with print ads in the Herald Sun and The Daily Telegraph.

The new campaign comes hot off the heels of the launch of Grill’d’s new and improved 100% Natural burger menu, which boasts ZERO artificial colours, flavours and preservatives, and is packed with the freshest locally sourced produce.

“Our latest campaign is not only creative and provocative, but represents our challenger brand personality and contrasting values to the traditional fast food industry. At Grill’d, we’re committed to whole food ingredients, fresh burgers and advocating for healthier lifestyles," Grill’d founder Simon Crowe says.

“The upcoming US election presented us with a timely opportunity to create a distinctive campaign that would both grab attention as well as highlight our core differences to the rest of the fast food industry, in a simple and fun way. We’re not the alternative to fast food, we’re the solution.”