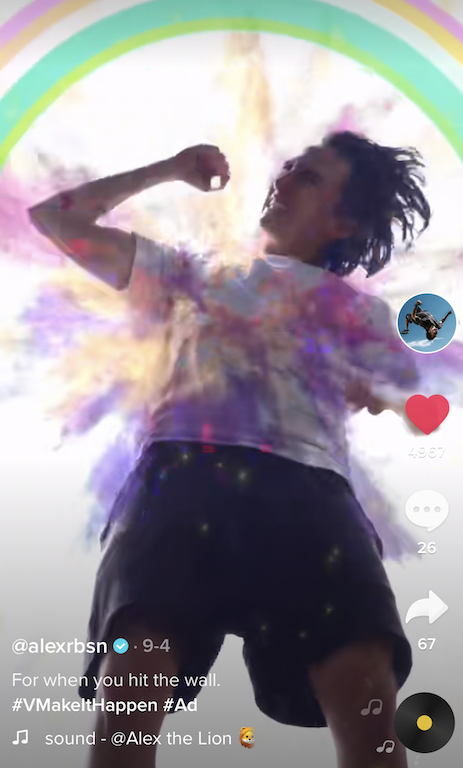 The six-week campaign delivered 21 million views on the hashtag #VMakeItHappen.

Given that V Energy is a transformational brand, with a long history of being part of culture, Clemenger BBDO Sydney turned to another Gen Z cultural favourite – TikTok.

The #VMakeItHappen campaign challenged people to get creative in showing how they make things happen in their daily lives – from the big, to the small, the funny and the downright ludicrous – all set to the low key beats of Anything U Want by Indigenous Aussie artist HVWKS.

To kick things off, V and Clemenger BBDO worked with some of Australia’s most popular and engaging TikTok creators to co-create authentic, entertaining and at times odd content.

Each piece brought to life MAKE IT HAPPEN in a way that was authentic to their audience. And then the branded handed over the keys of the challenge to the TikTok community.

“It’s always nerve-racking handing over the reigns of the brand to creators but we loved the result," Frucor Suntory senior brand manager on V, Chris Henbrey says.

"Rather than ‘pushing advertising’ the audience were much more engaged, bringing our idea to life in a way that mattered to them.”

The result was more than 21 million hashtag views and a flurry of user generated content.

The TikTok creator activity was staggered throughout the campaign to maintain momentum, with a second burst driving a new wave of UGC submissions three weeks post-launch.

The six-week campaign delivered 21 million views on the hashtag #VMakeItHappen, 81% ad recall lift and a 3% lift in attitude towards V Energy as a cool brand.

More than 653,000 video views were generated from videos created using both the official music and official hashtag – a view per video generated result TikTok called remarkable compared to results from other challenges.

TikTok herald #VMakeItHappen as the standard by which they now hold creator partnerships for TikTok Branded Hashtag Challenges.

Following the success of the campaign V and Clemenger BBDO Sydney have subsequently launched the next iteration of MAKE IT HAPPEN on TikTok.

“When you launch a big brand platform like MAKE IT HAPPEN you always aspire to get into popular culture," Clemenger BBDO Sydney ECD Darren Wright says.

"To not just get people talking about the campaign but interacting and playing with it as well. And that’s what’s so great when you partner with TikTok. The campaign goes to a whole new level of participation where people are creating their own content, starting trends and most importantly having fun with the brand.”

"Led by awesome Aussie TikTok creators, it opened the door for consumers to put their own spin on what the V Energy brand means to them," Armstrong says.

"This is what TikTok campaigns are all about -- inviting creation and participation; starting trends and becoming part of the culture."

Celebrating the diversity of people who use Moro every day to bring their own flavour to the kitchen.

WorkSafe Victoria's 'It Comes In Many Forms' via TBWA\Melbourne

Ensuring employers know their obligations and workers understand that they have rights under the OHS Act.