The campaign consists of three TV spots and charts the journey of a contestant trying to choose between Athena and Beep Bank – a traditional mortgage lender.

Home loan lender Athena’s latest hard-hitting TV campaign gives viewers a direct comparison of what customers get with Athena versus the banks, using the entertaining concept of a matchmaking show.

A potential home loan customer gets to decide whether they’d enjoy being tied up in decades of debt, or would prefer something short and sweet, in the latest TV campaign for Athena Home Loans created by The Royals.

Shot in the format of TV matchmaking shows, TAKE ME HOME LOAN consists of three TV spots and charts the journey of a contestant trying to choose between Athena and Beep Bank – a traditional mortgage lender.

It becomes obvious pretty quickly that this is a choice between a lender that has the customer’s best interests at heart, and one that would rather just neglect them in an unrewarding relationship.

Featuring an enthusiastic TV show host, heckling from the audience and a raft of puns, TAKE ME HOME LOAN continues the strategy of highlighting the benefits of being with Athena versus the banks.

“By using the well-known format of a matchmaking program, we set out to create an authentic-looking TV show, highlighting the vast differences between Athena and traditional lenders while reminding our audience that with Athena Home Loans – they can find a mortgage they can actually love," The Royals executive creative director Sydney, Seb Vizor says.

The TV spots are supported by social and digital advertising, and build on The Royals’ award-winning radio campaign in which Beep Bank fields queries from customers, reinforcing the confusing fees and complicated processes of traditional lenders.

Since launching in early 2019 with the brand platform ‘Love us and leave us’, Athena has been on a mission to help Australians pay off their home loan faster while giving them a great experience along the way.

It delivers on this promise by passing on RBA rate cuts immediately and in full, offering an automatic rate match guarantee that promises to never give new customers better rates than existing customers on a like-for-like loan, no fees, and ‘home loan hacks’ all designed to help Australians actually pay off their loan.

“As a challenger brand, Athena is all about executing bold, brave and differentiated marketing, calling out the behaviours of the banks that don’t act in the customers interest," Athena chief marketing officer Natalie Dinsdale says.

"The analogy of a matchmaking show provided the perfect vehicle to give the viewers a direct comparison in a humorous way and couch the dialogue in an emotive customer truth – the banks are not on your side.” 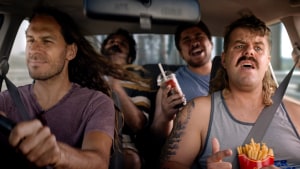