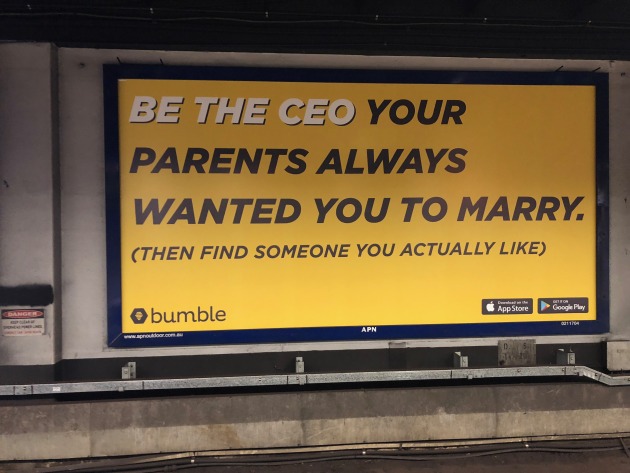 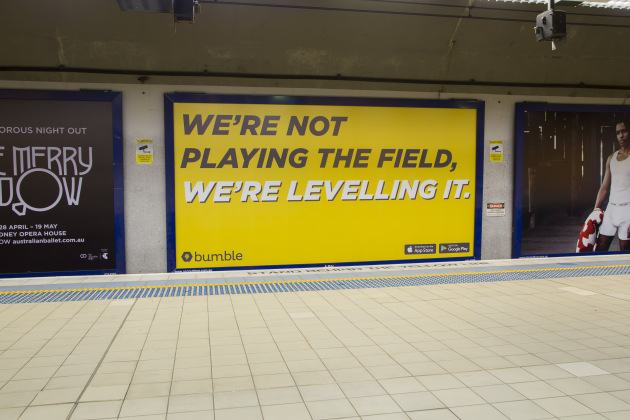 "We're not playing the field, we're leveling it," reads one of the Bumble billboards 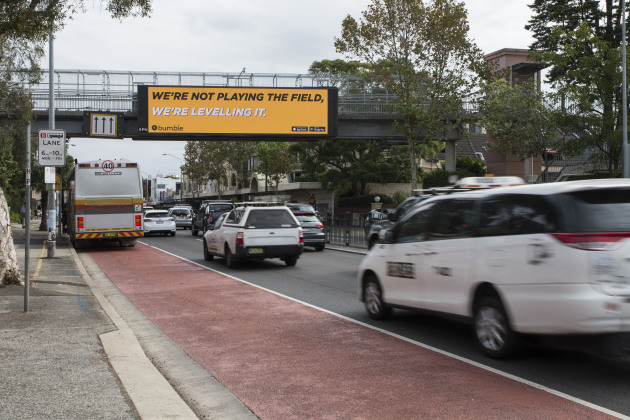 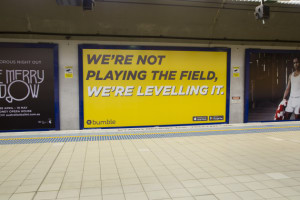 "We're not playing the field, we're leveling it," reads one of the Bumble billboards

Bumble is continuing its mission to empower women and take the four-year-old app global, rolling out its first Australian billboard campaign.

The campaign encourages users to be the CEO, rather than date the CEO, and not be afraid to make the first move - a core pillar of the Bumble app interface.

The billboards went live across Sydney last month and after a successful launch period, lifting downloads of the Bumble app, the campaign will go national, Battersby reveals.

As Bumble looks to increase awareness of its business across Australia, which includes Bumble BFF, a service that helps you make new friends, and its networking platform, Bumble Bizz, it's also hosting a range of bespoke events across Sydney and Melbourne.

"We are still in the awareness and education phase, hosting competitions and leveraging social platforms to get the word out and drive traffic," Battersby says.

"We hope that by doing so, when we spend more on marketing and larger events, we have a more engaged audience." 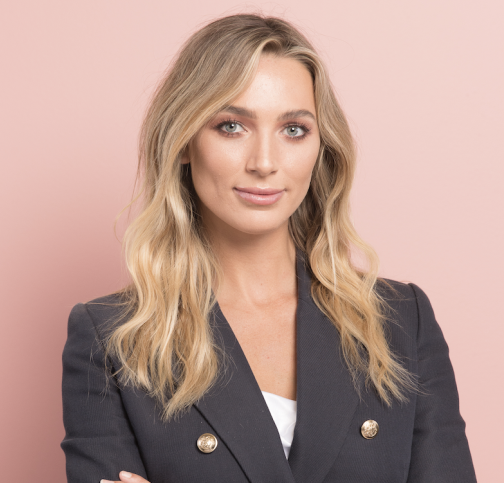 The events are tailored for singles, which get their invite through the app and the events are put on for free at Sydney and Melbourne hotspots, like Double Bay’s Matteo and Richmond’s Kong BBQ.

Relying heavily on social media to build its brand, Bumble invites several influencers to attend each event, such as Elle Ferguson, Laura Henshaw and Nadia Bartel.

With Bumble’s core audience ranging from the 23 to 28-year-old mark, Battersby says influencers play a vital role in creating buzz across its Instagram, as well as changing perceptions of the dating app industry.

“When we first started here 18 months ago, we knew changing perceptions of dating apps would be our hardest challenge,” she explains.

“We’ve been breaking down the stigma of online dating and had a mission to normalise it within Australia, which is why we’ve aligned ourselves with great brands, great people and great venues.”

Going beyond just dating is why Bumble has aligned itself heavily with business owner Nadia Bartel, who at first may seem a strange fit for the brand, being married with children.

But Battersby says the choice was deliberate to show the range of people who are using the app. 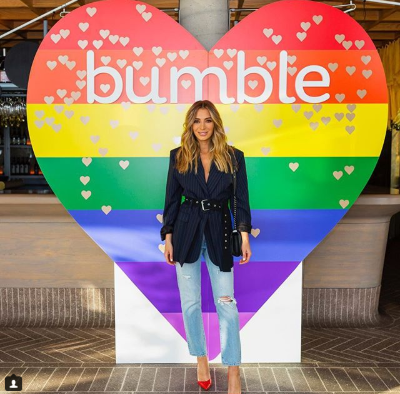 Nadia Bartel at a Bumble event in Melbourne this week

“We know the majority of our users are on Bumble for dating, but we are starting to see people are using our platform in other ways, through Bumble BFF and Bumble Bizz, and we’re attracting people in stable relationships for business networking,” Battersby says.

Bringing professionals on the platform has been one of the Bumble Australia teams’ main targets and next, it’s setting its sights on men.

“With Bumble Bizz I’m seeing so many amazing men on the platform. We won’t move away from focusing on women but we will also target events at men,” Battersby says.

Like the recent Bumble Bizz event held in Sydney, which brought professional women together to share their career trajectory, Bumble will look to do similar events but with male professionals.

It will also continue to align itself with big social events in Sydney and Melbourne, such as the upcoming Mercedez-Benz Fashion week - a smaller scale push compared to the US Bumble, which recently signed Kris Jenner as an ambassador.

Battersby says Bumble is also looking to grow its own team and will make a few hires in coming months to help it grow its presence with the 18-23 market.

Last year, AdNews spoke to Bumble's US marketing lead on its empowering women through dating and advertising. Read more here.