Bumble marketer on empowering women through dating and advertising 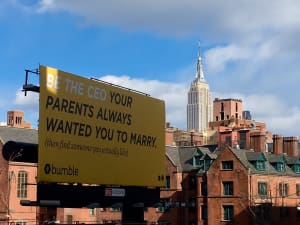 To take back a women’s control in modern dating and compete with Tinder, Bumble has launched billboards across America aimed at empowering women.

The ads encourage users to be the CEO, rather than date the CEO and not be afraid to make the first move. The move echoes Facebook's Mark Zuckerberg's Be the Nerd campaign from 2016.

Following on from Tinder’s revolution of the dating scene, Bumble launched in 2014. The app, referred to as the “feminist Tinder”, works in a similar way to Tinder’s interface but women must make the first move to initiate conversation.

With female founder Whitney Wolfe at the helm, also an original founder of Tinder, Bumble has been on a mission to revolutionise dating to give the women more control and it wants to communicate the female-first stance in its marketing.

Speaking with AdNews, Bumble director of marketing Chelsea Cain Maclin says the campaign plays on the age-old pressure that women feel to marry a certain standard of man.

“We found it really empowering to encourage women to go after the dreams their parents had for their spouses and be the person you're expected to marry,” Cain Maclin says.

“What we are trying to do as a brand is break down stereotypes and social boundaries for women, where they feel like they have to wait for the man to make the first move – both in dating and across every aspect of their life.”

Bumble VP of brand content Alexandra Williamson agrees that women have previously been told that approaching the man is aggressive or desperate, which is an outdated notion.

“Encouraging women to make the first move is only a small thing but it sets the entire tone of the initial introduction,” Williamson says.

“The campaign allows people to start to think differently about dating and apps and change people’s mindset.”

The objective of the campaign is to stamp out any negative connotations associated around using apps to find a potential partner, rather than spike downloads.

Cain Maclin explains that in the US, billboards were placed in areas of high percentage users of Bumble to facilitate conversations around the app’s differentiating features.

The campaign has experimentation for Bumble’s marketing. With a positive response, Cain Maclin says she hopes to roll out a similar strategy globally, including Australia.

Bumble has previously not invested in significant advertising in this market, opting for experiential marketing, hosting an event in Bondi last week to celebrate the end of summer.

“If downloads are a result of the campaign that’s great, but we really wanted to spark real conversations around empowerment for people already using the app,” she says.

“We could do that through the app, but we know that’s disruptive so we try to limit the amount we force our own brand upon users.”

“Bumble’s values are at the core of all our marketing and everything we do. We want to design a platform that we are proud to have our daughters use one day,” Williamson says.

“Our zero-tolerance for harassment and banning shirtless selfies are the types of policies that help us build the brand we want to use.”

It’s not only dating Bumble is eyeing off, also launching a business that helps people make friends and a career networking platform, BumbleBizz.

“From friendship to dating, we are creating a world around the core values of kindness and connection,” Cain Maclin says.

“If we are doing our job right, the dating app experience should be short, which is why we think it’s so important to touch people throughout their life through our other ventures.”