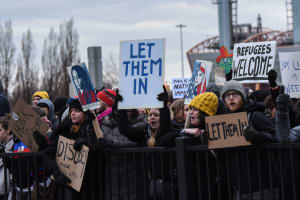 Airbnb is providing free housing to refugees and anyone not allowed in the US. Stayed tuned for more, contact me if urgent need for housing

CEOs of Microsoft, Apple, Twitter, Netflix, Uber, Airbnb and Tesla Motors have denounced the policy, which would affect their own employees working in the US legally, as well as their competitive quest for talent.

Not allowing countries or refugees into America is not right, and we must stand with those who are affected.

The Executive Order's humanitarian and economic impact is real and upsetting. We benefit from what refugees and immigrants bring to the U.S. https://t.co/HdwVGzIECt

In an email to employees Apple CEO Tim Cook said his company has contacted the White House to explain the “negative effect” the restrictions will have on workers.

Microsoft chief executive Satya Nadella, who was born in India, said the company will continue to be an advocate on the issue. “As an immigrant and as a CEO, I’ve both experienced and seen the positive impact that immigration has on our company, for the country, and for the world."

Uber came under heavy fire for breaking a taxi strike that supported protesters at JFK, with the hashtag #DeleteUber trending worldwide. The company continued to offer its service at the airport, where the New York taxi works had waged a strike “in solidarity with all of our peace-loving neighbours against this inhumane, cruel, and unconstitutional pure act of bigotry.”

As criticism of Uber heated up, competitor Lyft announced it would donate $1 million to the America Civil Liberties Union Lawyers who are challenging the immigration ban and working to identify detainees.

Uber attempted to counter the criticism with its CEO Travis Kalanick emailing employees and offering them compensation for those impacted by the ban.

Our CEO's reaction to immigration order: "We'll compensate drivers impacted by the ban pro bono for next 3 months." https://t.co/meCT1ahEjH

In a letter to employees, Google CEO Sundar Pichai said he was "upset about the impact of this order and any proposals that could impose restrictions on Googlers and their families."

Twitter is built by immigrants of all religions. We stand for and with them, always.

Facebook founder Mark Zuckerberg took a stance, adding: " The United States is a nation of immigrants, and we should be proud of that."